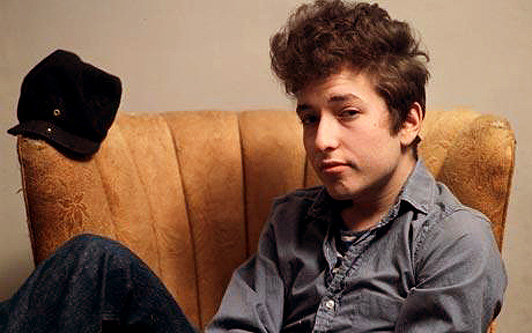 Bob Dylan - the formative grumblings and stirrings of the 60's Song and Dance Man.

Bob Dylan – the formative grumblings and stirrings of the 60’s Song and Dance Man.(Photo: Don Hunstein)

A little goes a really long way:Become a Patron!

Something special tonight – one of the many radio programs Bob Dylan performed on early in his career. In the 1950’s and early 1960’s, when FM radio was almost the sole domain of the “audiophile” and the independent station, many programs were devoted to live music – whether it was Jazz or Folk or Classical. And it was a major factor in getting new artists established to an audience not particularly interested in the mainstream, but interested in what was new.

In May 1960, Dylan dropped out of college at the end of his first year. In January 1961, he traveled to New York City to perform there and visit his musical idol Woody Guthrie, who was seriously ill with Huntington’s disease in Greystone Park Psychiatric Hospital. Guthrie had been a revelation to Dylan and influenced his early performances. Describing Guthrie’s impact, he wrote: “The songs themselves had the infinite sweep of humanity in them… [He] was the true voice of the American spirit. I said to myself I was going to be Guthrie’s greatest disciple.” As well as visiting Guthrie in hospital, Dylan befriended Guthrie’s protégé Ramblin’ Jack Elliott. Much of Guthrie’s repertoire was channeled through Elliott, and Dylan paid tribute to Elliott in Chronicles: Volume One.

This session, from July 19, 1961 features Bob Dylan (and a guest appearance from Danny Kalb), is from the program Saturday Of Folk Music from, I think, WNCN.

Enjoy and get ready for Monday.