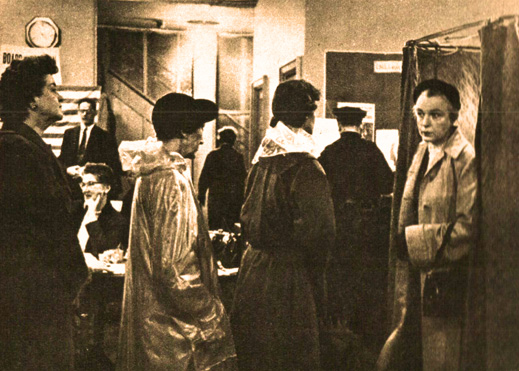 The 1956 Presidential election was interesting in that Eisenhower won a landslide victory, yet both the House and Senate remained in control of the Democrats and that left the Republicans scratching their collective heads.

It’s been said that it was the 1956 election that began the Republican swing to the far right – one that would make its presence known in the 1962 off-year election, and certainly with the 1964 election.

But in 1956, as in last night, there was a goodly amount of soul-searching on the part of the Republicans as to just what was the party’s future.

And there was also the acknowledgment that well over half the electorate in 1956 were Women. And that was a force to be reckoned with. They liked Ike, but weren’t too crazy about the other guys.

Here is a postmortem, a sum-up of the election of 1956, as presented on the New World Program over NBC Radio on November 11, 1956.

Interesting insights and harbingers for the future – if anyone cared to notice.