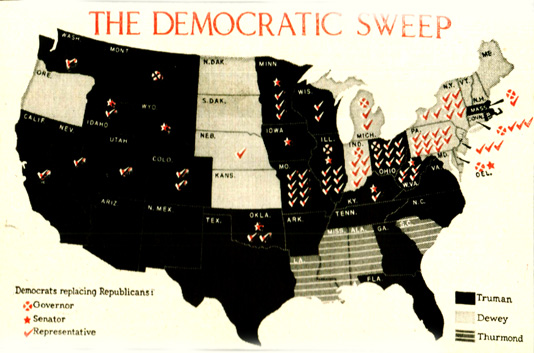 Republicans and Pundits alike were, in a word; stunned.

Republicans and Pundits alike were, in a word; stunned.

No one was more surprised by the outcome of the 1948 Presidential election than Republicans and Mainstream Media. Since the campaign started, it was almost assured that Republican candidate Thomas E. Dewey would be a shoe-in to the White House. Even the “Liberal” media pundits were saying that, even if Truman did win election (it wasn’t a re-election as Truman assumed the Presidency after the death of FDR in 1945), it would be squeaker and Truman would be ineffective.

They were wrong – they were so wrong. Even in a post-election speech, Truman chided the media for having so little faith, citing and mocking veteran newscaster H.V. Kaltenborn‘s early conclusion that Truman was going down to defeat.

Here is one of the radio programs devoted to the retrospective glance. The Chicago University of The Air conducted a roundtable discussion over what happened and what was in store for the future.

One of the participants in the discussion was Professor of Political Science at The University Of Chicago, Robert Horn. His assessment summed it up rather well.

Robert Horn (Dept. of Political Science – University of Chicago): “ I am a Republican and I am disturbed about the future of the Republican Party. After the shock of the election I am beginning to wonder, like millions of others, what the future holds for the Republican Party or whether it has any future. This year marked the fifth consecutive defeat for Republican Presidential candidates. This Presidential election was the closest one since 1916. But Governor Dewey in 1948 received fewer votes than he got in 1944, although more votes were cast this year than in 1944. And Republican Congressional candidates generally ran below Dewey this year. In fact, Governor Dewey received only 600,000 votes more than Herbert Hoover received in 1928. Although there are many more million potential and actual voters now than there were twenty years ago. Moreover, this fifth consecutive defeat means that the Republicans by 1952 will have been out of the White House for the longest time that either the Democrats or the Republicans have been out of power since the end of the Civil War. The Republicans can no longer claim to be the majority party of the country. Many people are saying, that unless the Republican Party changes, it will die.”

It’s a familiar meme in recent years – one that seems just as apropos now as it was in 1948.

Here is that episode of University of Chicago Roundtable, as broadcast on December 12, 1948.