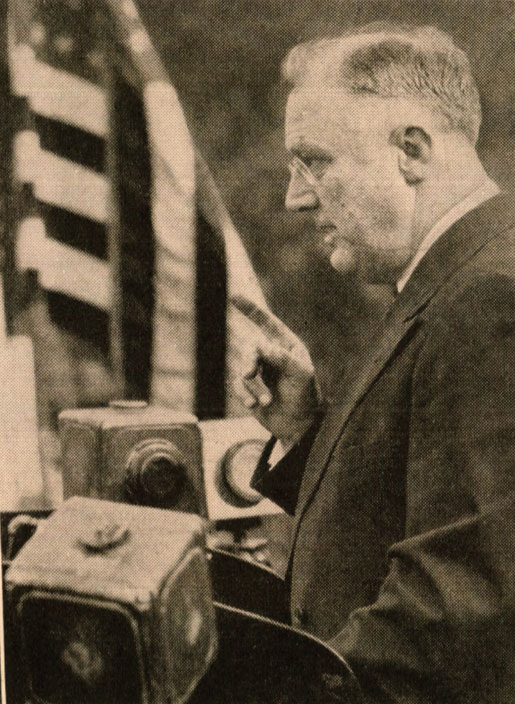 Undoing decades of fiscal insanity wasn't going to happen with the snap of a finger.

FDR: Undoing decades of fiscal insanity wasn’t going to happen with the snap of a finger.

This day in 1935, President Roosevelt delivered an address to a huge gathering near his “Warm Springs White House“, where he spent the Thanksgiving holiday. The address was straightforward and simple – it was about the state of the Economy, the Budget and Taxes.

President Roosevelt: “Let me talk some more about money.
Last April I stated to the Congress what I have held to consistently ever since – that it was the hope of the Administration that by some time in November of this year we would substantially end the dole, and offer in place of it employment to, by far, the greater part of the three and a half million employable persons we estimated were on relief rolls in the United States.
Week after week, from that time on, some individuals and some organizations and some groups, careless of the truth, regardless of scruple, have sought to make the American people believe that this program was a hopeless failure and that it could not possibly succeed.
Today is the twenty-ninth day of November. It gives me a certain satisfaction to be able to inform you, and through you the Nation, that on Wednesday, two days ago by actual figures, there were three million one hundred and twenty-five thousand persons at work on a great variety of useful projects in every State of the Union. The small remaining number have received orders to report to work on projects already under way or about to be started. That result, I believe you will agree with me, constitutes a substantial and successful national achievement.
Aside from the tremendous increase in morale through substituting work for a dole, there is the practical side of permanent material benefit. Within sight of us today, there stands a tribute to useful work under Government supervision – the first slum clearance and low-rent housing project. Here, at the request of the citizens of Atlanta, we have cleaned out nine square blocks of antiquated squalid dwellings, for years a detriment to this community. Today those hopeless old houses are gone and in their place we see the bright cheerful buildings of the Techwood Housing Project.
Within a very short time, people who never before could get a decent roof over their heads will live here in reasonable comfort amid healthful, worthwhile surroundings; others will find similar homes in Atlanta’s second slum clearance project, the University Project; and still others will find similar opportunity in nearly all of the older, overcrowded cities of the United States.
I take it that it has been equally worthwhile to the Nation to give jobs to the unemployed in the construction of a vast network of highways, including thousands of miles of farm-to-market roads; in repairing great numbers of schools, and building hundreds of new schools in city and country; in helping cities to put in sewers and sewage disposal plants and water works; in constructing cold storage warehouses and county recreational buildings; in creating aviation fields; in giving a million boys a chance to go to C.C.C. camps and to work on forestry and soil erosion prevention; in controlling malaria; in pushing health projects; in putting white-collar workers into jobs of permanent usefulness to their communities, and, last but not least, in giving youth an opportunity for better education.
Into the ears of many of you has been dinned the cry that your Government is piling up an unconscionable and back-breaking debt. Let me tell you a simple story: In the spring of 1933, many of the great bankers of the United States flocked to Washington. They were there to get the help of their Government in saving their banks from insolvency. To them I pointed out, in all fairness, the simple fact that you could not make bread without flour, the simple fact that the Government would be compelled to go heavily into debt for a few years to come, in order to save banks and save insurance companies and mortgage companies, and railroads, and to take care of millions of people who were on the verge of starvation. Every one of these gentlemen expressed to me at that time the firm conviction that it was all well worth the price and that they heartily approved.
But I did not stop there. In order to get their further judgment, I asked them what they thought the maximum national debt of the United States Government could rise to without serious danger to the national credit. Their answers – remember this was in the spring of 1933 – were that the country could safely stand a national debt of between fifty-five and seventy billion dollars. I told them that a rise in the national debt to any such figure was, in my judgment, wholly unnecessary, and that even if they, the bankers, were willing I could not and would not go along with them. I told them then that only a moderate increase in the debt for the next few years seemed likely and justified. That objective holds good today; but remember that at that time many bankers and big business men would have been willing to put the country far deeper into debt than I shall ever let it go”.

Simple, straightforward and remarkably current from FDR 77 years ago.

Note: The sound quality on this post isn’t all that good – lots of noise and levels jumping around. So it may take some effort to understand the entire speech. But unfortunately, it’s the best that’s available.