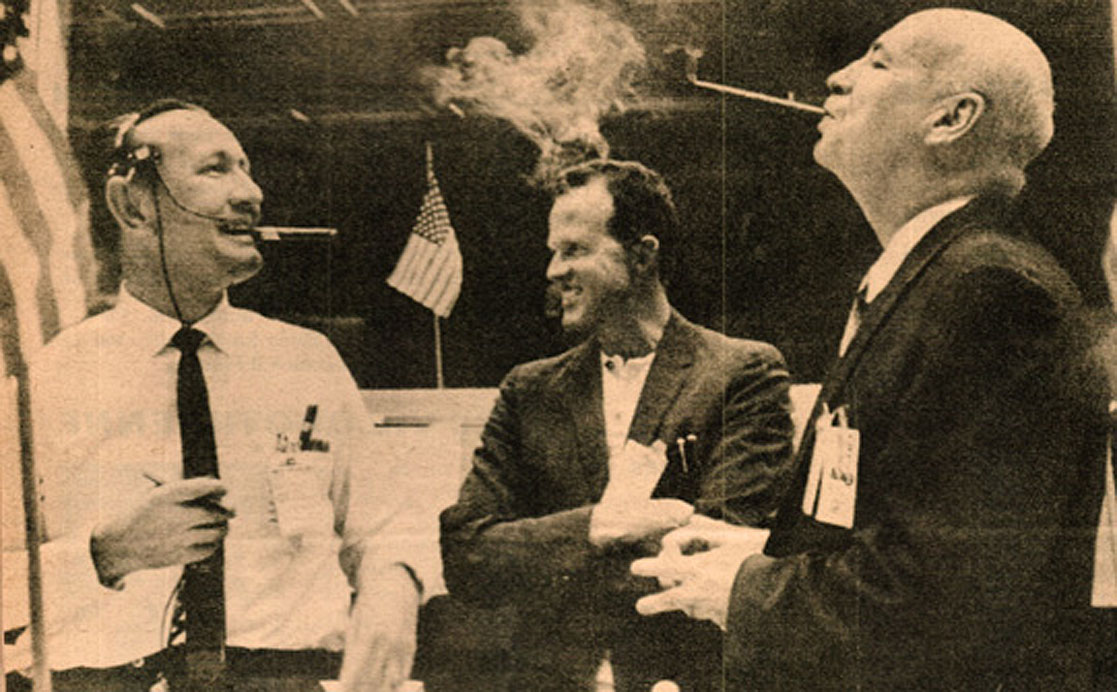 Gemini 7 launch - cigars all around in Houston.

Gemini 7 launch – cigars all around in Houston.

This day in 1965 marked the launch of Gemini 7 in what would be the longest manned space flight in U.S. history (until the 1970s). It also marked the first rendezvous in space. Fourteen days and 206 orbits around the earth, the mission was piloted by Frank Borman and James Lovell.

Here is an excerpt from Wikipedia:

Gemini 7 was originally intended to fly after Gemini 6, but the original Gemini 6 mission was cancelled after the failure during launch of the Agena Target Vehicle with which it was meant to rendezvous and dock. The objective of rendezvous was so important, that it was decided to fly the alternate Gemini 6A mission concurrently with Gemini 7, using the latter as the rendezvous target.

The original mission of Gemini 7 changed little with these new plans. It was always planned to be a long duration flight, investigating the effects of fourteen days in space on the human body. This doubled the length of time that anyone had been in space and stood as the longest spaceflight duration record for five years.

This 14-day mission required NASA to solve some of the problems of long-duration space flight, such as stowage of waste (the crew had practiced stuffing waste paper behind their seats before the flight). Timing their workday to match that of the prime shift ground crews, both men worked and slept at the same time. The mission conducted twenty experiments, the most of any Gemini mission, including studies of nutrition in space. The astronauts also evaluated a lightweight spacesuit, the G5C, which proved uncomfortable when worn for a long time in the Gemini spacecraft’s hot, cramped quarters. The high point of the mission came on the eleventh day with the rendezvous with Gemini 6A. Both astronauts, heeding the advice of Pete Conrad who had flown for eight days on Gemini 5, took books along to read. Gemini 7 was the longest manned space flight in U.S. history until the Skylab missions of the 1970s, and held the record for the longest space flight until Soyuz 9 in June 1970.

Here is a half-hour excerpt from that launch, as reported by CBS News on December 4, 1965.