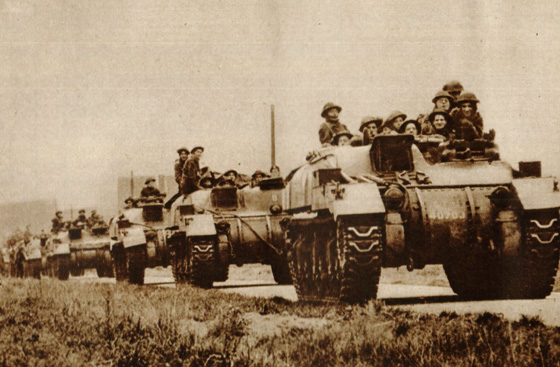 The mad dash to The Siegfried Line.

On The Third Anniversary, An Earthquake – December 7, 1944

The mad dash to The Siegfried Line.

On this day in 1944 it was the third anniversary of the attack on Pearl Harbor, the event that got the U.S. involved in World War 2. So on December 7, 1944 war was raging on all fronts, along with an acknowledgement of the day from Mother Nature by way of a devastating earthquake in southern Japan. Initial reports claimed the quake had the same intensity as the 1906 San Francisco quake with strong and continuous aftershocks going on for six hours.

The War in the Pacific was dotted with on-air bulletins regarding U.S. troops landing in Armak Bay in Leyte, and successfully taking positions and quickly moving inland. Meanwhile, the Japanese Army staged an unsuccessful attempt at landing paratroops on Leyte, with numerous casualties as the result.

The Japanese also staged raids on Saipan, a strategic island where the U.S. was launching B-29 raids on Japan. The raid was turned back with only one U.S. casualty reported.

On the Western Front. Allied armies were racing to cross The Siegfried Line. On the Eastern Front, Russian troops were moving quickly towards Austria.

Meanwhile, the Civil War in Greece was creating no end of headaches for the British, with troops being sent in to quell the violence and calls from Winston Churchill to establish a democratic government, rather than the rumored Communist one as was being reported. Even U.S.Secretary of State Stitinius had a few words about the conflict, saying Greece needed to find its independence, but stopped short of condemning the Churchill move to support overthrow of the existing Greek government.

And that’s part of what went on for this December 7th in 1944, as reported over WEAF in New York and the 6 O’clock News With Don Hollenbeck.