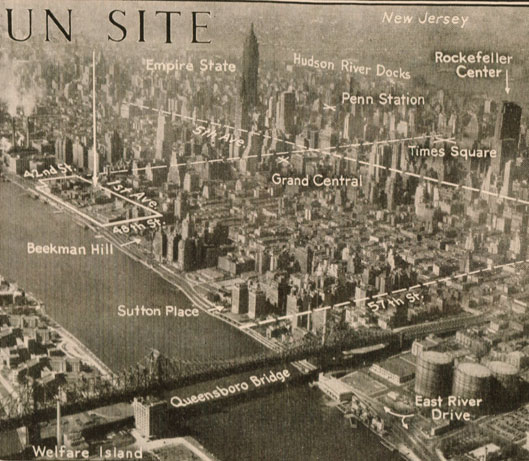 A proposed site for the permanent UN building. Where the fighting could go unabated.

A proposed site for the permanent UN building. Where the fighting could go unabated.

This day in December, 1946 was loaded with news of Union talks, threats and pickets. President Truman beginning the process of dismantling the maze of Government agencies set up during the War. Also loaded on this day in December were intrigues from Capitol Hill‘s favorite racist, Senator Bilbo of Mississippi. Seems the notorious Senator had run afoul of a few Government agencies with reports of corruption, cash-for-favors and influence peddling racing around the halls of Congress. The plot thickened when an assistant to Bilbo had gone missing in an attempt to dodge a subpoena. The Senator remained staunchly smug over the whole thing.

Meanwhile, the fledgling United Nations was getting down to business with discussions over the growing unrest in Greece and a request for admission to the club from Siam, as well as working on a far-reaching disarmament proposal which was hoped to do away with nuclear weapons. Meanwhile, the job of shopping for a new and permanent site for the United Nations was underway with a proposal from the Rockefeller Foundation, who offered a parcel of land right next to the East River and, at the moment, the site of slaughterhouses and tenement apartment buildings. The concept of “use-your-imagination” came to mind.

And in Europe, former pre-war President of France Leon Blum was ushered back into office. The job of setting up a new government was his to figure out.

All that, and much more, including local news for Los Angeles, via KFI and NBC’s News Of The World for December 12, 1946.