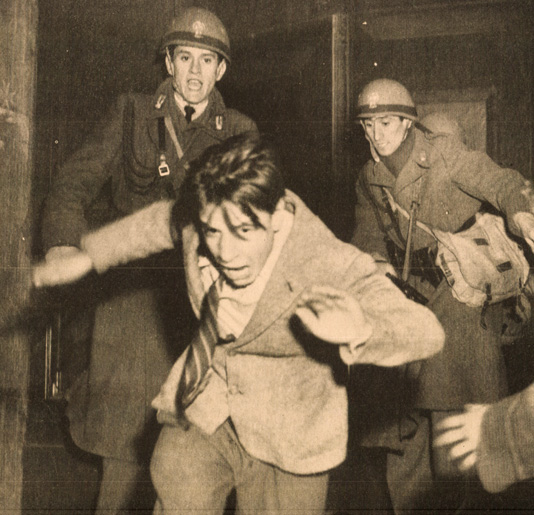 December 13, 1947 – The Foreign Ministers Conference: Living In A Post-War Predicament

News for this day was dominated by the goings on in Europe. Primarily over the Foreign Ministers Conference in London, which wasn’t going as well as expected. But also, news of civil unrest throughout all of Europe brought on by strikes, shortages and corruption. It was reported that the Conference was going to be postponed for a week in an effort to avoid another acrimonious session. The postponement was explained as a convenience for a study of relative positions after three weeks debate was officially announced about two hours before Molotov, Bidault and Marshall were to meet at Lancaster House. The decision to call for a postponment came as a result of Bidault’s desire to “cool tempers” and to bring a certain amount of calm before resuming. It was agreed by Marshall and Bevin that a postponement would be serving a useful purpose, but neither wanted to be responsible for suggesting it out of concern that Molotov could misconstrue it. Instead, Bidault’s suggestion for a “cooling of tempers” was the best political solution. The Foreign Ministers had their work cut out for them. The trick was keeping it all together.

News of Strikes in France, threatening to topple the government. News of the explosion in Black Market goods throughout England and the crackdowns taking place in France, Italy and elsewhere.

The big perceived threat was just how much this strife would play into the growing Communist influence throughout Europe. Would these shaky-ground governments give way to Communist takeovers as strikes and shortages continued? No one knew for sure. There were signs of pessimism permeating the Conference. The question of Germany and re-unification was once again brought up, but considered a non-starter to the Soviets. The question of reparations from Germany was of more importance to Moscow. How was the Marshall Plan impacting on European recovery, and was this yet another element in the growing Cold War status between East and West?

A fascinating group of reports from the European Capitols and speculations over the future by NBC correspondents via this European Roundup for December 13, 1947 (a Saturday that year).