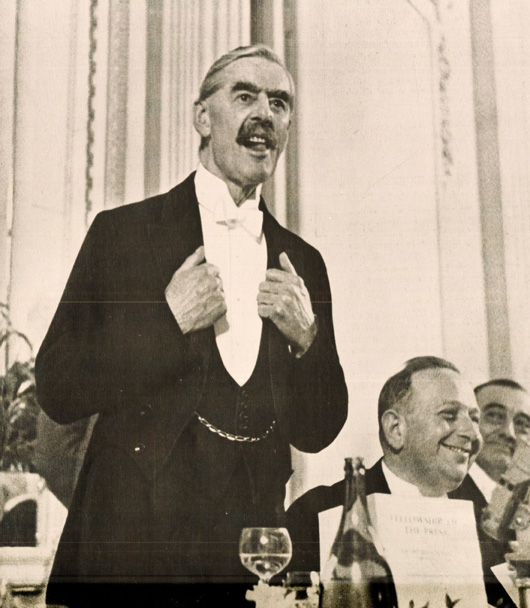 With the Munich Crisis on hold and much of Europe breathing a sigh of relief, Prime Minister Neville Chamberlain addressed a gather of the Foreign Press at a function at Grosvenor House in London on December 13, 1938. He spoke about Britain’s Foreign Policy and the crisis, now averted.

But some of that may have been the proverbial “whistling in the dark”, as the crisis was far from over and the growing storm clouds of war were just getting started. Summer of 1939 would bring it all back to a boil. But for December of 1938 there was at least some breathing room.

A trivial incident that reflected the deteriorating state of Anglo-German relations occurred in December 1938 when Chamberlain addressed the correspondents of the German News Agency at a formal dinner in London, and warned of the “futility of ambition, if ambition leads to the desire for domination”. The implied rebuke to Hitler led to Herbert von Dirksen, German Ambassador to the Court of St. James, walking out of the dinner in protest. Moreover, reports from the Chiefs of Staff (COS) in late 1938 that within a year’s time, British air defences would be strong enough due to increased fighter production and the completion of the Home Link radar chain to resist and repel any German attempt at a “knock-out blow” from the air, the fear of which was a major factor in British policy in 1938. The assurances provided by the COS that Britain could repel and survive a German attempt at “knock out blow” in 1939 played a more significant role in the change in emphasis in Chamberlain’s foreign policy that year. At the same time, in late 1938 the Chancellor the Exchequer Sir John Simon reported to the Cabinet that the increased military spending Chamberlain had brought through in 1937–38 was leading to inflation, high interest rates, a balance of payments crisis, and the danger that British financial reserves (the so-called “fourth arm of the defense”) would be used up, leading to a situation where “we should have lost the means of carrying on a long struggle altogether”. At same time, Simon expressed concern to Chamberlain about the international repercussions of where “…defense plans should be openly seen to have been frustrated by the financial and economic situation”.

Here is that complete address, as broadcast by the BBC Shortwave Service and relayed to all the major U.S. networks on December 13, 1938.