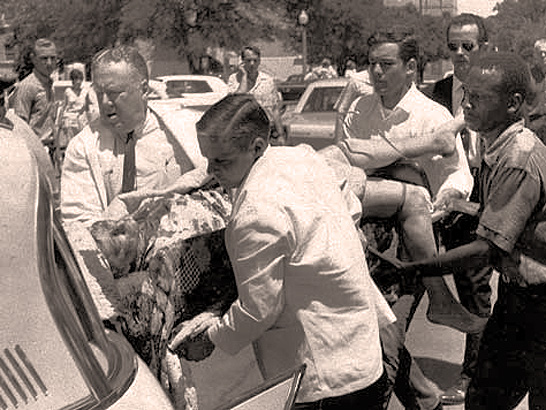 Click on the link here for Audio Player: America The Violent-1969

Perhaps not as bad as it is now, but violence seems to be just as integral a part of American society as the automobile. The question has always been ‘why?’ and the hand-wringing and breast-beating comes with clock-like regularity.

Violence has been part of our culture from the beginning, it is always talked about, is it always laced with a ‘something-must-be-done’ attitude, and it is quickly forgotten when the victims are buried, the reporters have gone home and the crime-scenes are wiped clean.

Every time an event, such as the one at Sandy Hook happens, two sets of comments come flying forth – “We have to do something about this” and “Oh, let’s not make it a political issue, let’s grieve now and we’ll deal with it later”.

And nothing ever happens.

And as a way of illustrating that nothing ever happens, here is a radio documentary produced in 1969 (yes, 43 years ago), that asked the question “why sort of society have we become?”. And with all the hand-wringing and soul-searching, nothing came of it. No solutions, only problems. And the violence escalated.

And then there was Friday and the same comments came out – “we have to do something about this” and “oh, let’s not make it a political issue, let’s grieve now and we’ll deal with it later”.

There is no later, there is only now. And now is the time to deal with it, to deal with the violence, deal with the hate, deal with the raging Mental Illness in this country and come up with tangible, plausible, workable solutions. This cannot be put off another hour or day – it has to be dealt with, discussed and brought out in the open now.

And as a way of reminding you that this conversation has been rife with fits and starts for a VERY LONG time, here is a reminder that the topic was the same in 1969 as it is now.

And this time it has to be different.