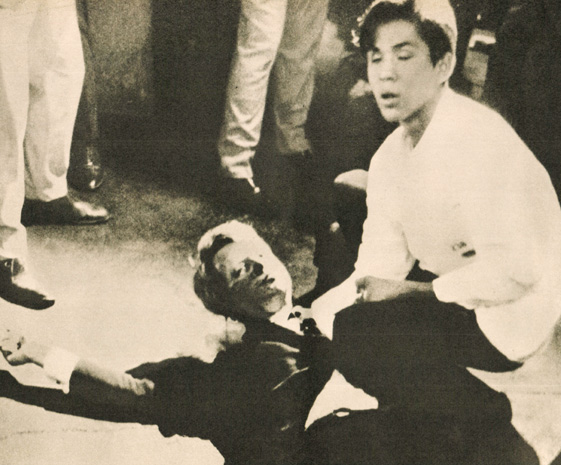 Robert Kennedy shooting 1968 - the end of American innocence came long before this. But it got no better.

Robert Kennedy shooting 1968 – the end of American innocence came long before this. But it got no better.

And the concern that we were becoming a society of mediocrity and corruption in our political system was a very real fear as far back as that.

In this discussion, part of the Open Mind series on Radio and Television (we did have intelligent discussions back then), three assessments on the problem were given by former Supreme Court Justice Thurgood Marshall, Socialist Norman Thomas and philosopher Reinhold Niebuhr.

Thurgood Marshall: “The middle group in America, and I think this is what has happened over a period of years, you take the middle class economic class, a man that’s about to be made vice-President, or the young vice-President bucking to become Executive vice-President; he’s very careful any anything “controversial”. So anything controversial they stay out of. And that’s what’s wrong with politics in general in this country is that those people will not engage in politics. They don’t want to get into anything. So with the race problem, they’re not going to get involved unless there’s some leadership that pushes him. Now if the President of this corporation or that corporation had been willing to get into the controversy, the vice-President would have, and the foreman. But it’s the power structure that failed to move. And I think that’s a responsibility that’s got to be met. We criticize the Ministers in the South for not taking a position on the School cases. It’s not fair to criticize the Ministers, criticize their boards of Trustees. Those Ministers like to eat like everyone else.”

That this discussion could have just as easily taken place last month instead of fifty years ago begs the notion that, not only have things not changed, they have in fact, become much worse. Cynicism and mediocrity have become our mainstream and violence has become our way of life.

Maybe, just maybe there can start to be a glimmer of change . . . someplace.