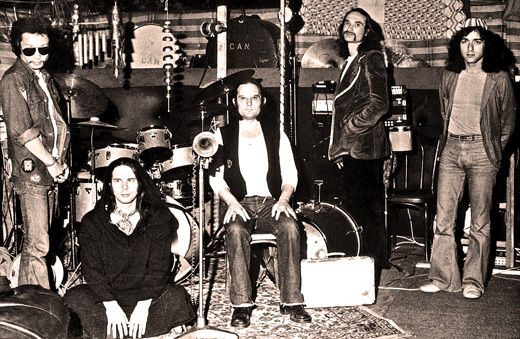 Can - Leave it to the Germans to ratchet up the Progressive Movement a few notches.

Can – Leave it to the Germans to ratchet up the Progressive Movement a few notches.

Your support is crucial: Become a Patron!

Can were one of those bands no one thought would be as influential in 1974 as they became. They had taken the cause of Progressive Rock and ratcheted it up a few notches and introduced Electronic music in a way that hadn’t been full explored by Rock bands previously. They were not playing around. Can’s founder Irmin Schmidt was already an accomplished composer and concert pianist when he fell under the spell of the likes of Steve Reich and Karlheinz Stockhausen. The result was a dramatic change, not only in his view of music, but in the future of Music for decades to come.

Soon Over Babaluma from 1974 continued in the ambient style of Future Days, yet it regained some of the abrasive edge of Tago Mago and Ege Bamyasi. In 1975, Can signed to Virgin Records in the UK and EMI/Harvest in Germany, appearing the same year on BBC’s Old Grey Whistle Test where a memorable performance of Vernal Equinox involved Schmidt playing one keyboard section with a series of rapid karate chops. Shortly after the appearance Schmidt suffered a broken leg which led to cancellation of the band’s UK tour.

The later albums Landed (1975) and Flow Motion (1976) saw Can moving towards a somewhat more conventional style as their recording technology improved. Accordingly, the disco single “I Want More” from Flow Motion became their only hit record outside Germany. Co-written by their live sound mixer Peter Gilmour, it reached No 26 in the UK charts in October 1976, which prompted an appearance on Top of the Pops, where Czukay performed with a double bass. In 1977 Can were joined by former Traffic bassist Rosko Gee and percussionist Rebop Kwaku Baah, both of whom provided vocals to Can’s music, appearing on the albums Saw Delight (1977), Out of Reach (1978) and Can (1979). During this period Holger Czukay was pushed to the fringes of the group’s activity; in fact he just made sounds using shortwave radios, Morse code keys, tape recorders and other sundry objects. He left Can in late 1977 and did not appear on the albums Out of Reach or Can, although he was involved with production work for the latter album. The band seemed to be in a hiatus shortly afterwards, but reunions have taken place on several occasions since.

Those of you who admire the music of Radiohead and Massive Attack only have to listen to a few bars of Ta Hyidit Yanit, the 20 minute magnum opus tonight, to know where it all came from.

At the time nobody thought otherwise – and man, were they wrong.

Here is Can, recorded live at Golders Green Hippodrome on March 2, 1974 and recorded (thank god) by The BBC.