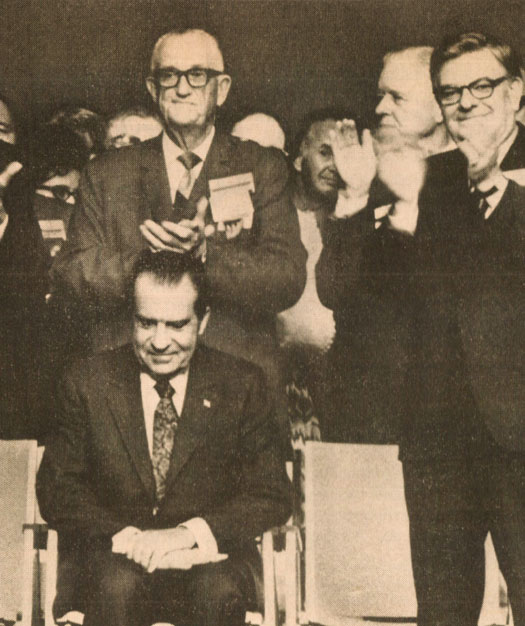 Nixon at The Dairymen's Convention in 1971 - The gift that keeps on giving.

Nixon at The Dairymen’s Convention in 1971 – The gift that keeps on giving.

Click on the link here for Audio Player: News for January 8, 1974

News on this January 8th in 1974 continued with goings-on at The White House. Watergate was not going to go away, much to the Nixon Administration’s wishes it would.

The White House did issue a White Paper on the growing controversy surrounding contributions to the Nixon re-election campaign from The Dairymen’s Association and International Telephone & Telegraph amid allegations the funds were, in essence, buying influence from the Nixon White House.

In an effort to put a lid on things, the White House went on to add the White Paper just released would be the last regarding Watergate-related matters for the foreseeable future.

In other news: Economic indicators saw a climb in Wholesale prices, which didn’t bode well for food and gas prices.

Speaking of oil, the government auction of 5,000 acres of land in Western Colorado for Shale Oil drilling fetched an unprecedented $840 million from 8 Oil companies interested in what was termed “a new alternative to Foreign Oil”.

With all the Watergate-related talk, The Ervin (Watergate) Commission was considering a recommendation of placing a one-term limit on the Presidency.

The Wounded Knee Trial began on this day.

The State Department said it was considering starting up talks with Cuba, with the possibility of reinstating Diplomatic ties with the Castro regime. Nothing confirmed one way or the other.

And all eyes were skyward over Comet Kohoutek, slated to make an appearance in the next several days.

All that, and a lot more for this January 8, 1974 as reported on The NBC Nightly News.