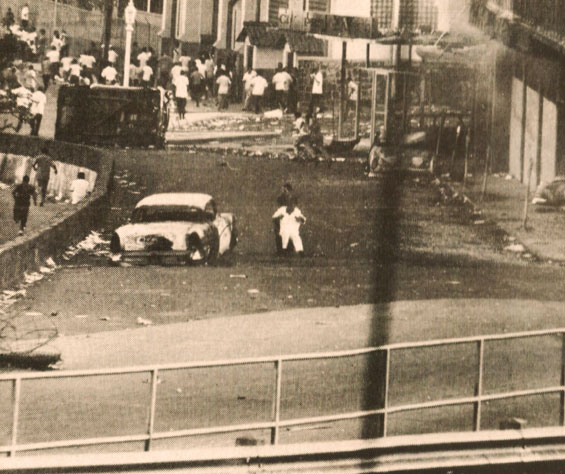 On this day in 1964, tensions were running very high between the people of Panama and the United States. The issue was over the Canal and sovereignty of the Canal Zone and the riots that ensued.

After Panama gained independence from Colombia in 1903, with the assistance of the U.S., there was resentment amongst some Panamanians as a result of the Hay–Bunau-Varilla Treaty, which ceded control of the Panama Canal Zone to the U.S. “in perpetuity” in exchange for a 10 million dollar initial payment and yearly 250 thousand dollar payments thereafter. In addition, the United States Government purchased title to all the lands in the Canal Zone from the private owners. The Canal Zone, primarily consisting of the Panama Canal, was a strip of land running from the Pacific Ocean to the Caribbean and had its own police, schools, ports and post offices. The Canal Zone became U.S. territory (de facto if not de jure).

In January 1963, U.S. President John F. Kennedy agreed to fly Panama’s flag alongside the U.S. flag at all non-military sites in the Canal Zone where the U.S. flag was flown. However, Kennedy was assassinated before his orders were carried out. One month after Kennedy’s death, Panama Canal Zone Governor Robert J. Fleming, Jr. issued a decree limiting Kennedy’s order. The U.S. flag would no longer be flown outside Canal Zone schools, police stations, post offices or other civilian locations where it had been flown, but Panama’s flag would not be flown either. The governor’s order infuriated many Zonians, who interpreted it as a U.S. renunciation of sovereignty over the Canal Zone.

In response, outraged Zonians began flying the U.S. flag anywhere they could. After the first U.S. flag to be raised at Balboa High School (a public high school in the Canal Zone) was taken down by school officials, the students walked out of class, raised another flag, and posted guards to prevent its removal. Most Zonian adults sympathized with the student demonstrators.

In what was to prove a miscalculation of the volatility of the situation, Governor Fleming departed for a meeting in Washington, D.C. on the afternoon of January 9, 1964. For him and many others, the U.S.-Panama relationship was at its peak. The exploding situation caught up with the Governor while he was still en route to the U.S. over the Caribbean.

There are conflicting claims about how the flag was torn. Canal Zone Police Captain Gaddis Wall, who was in charge of the police at the scene, denies any American culpability.

Some reporters alleged one giant communist plot, with Christian Democrats, Socialists, student government leaders and a host of others controlled by the hand of Fidel Castro. The confrontation was not contained in the Panama City area. Word of the fighting quickly spread all over Panama by radio, television and private telephone calls. The incomplete censorship had the side effect of contributing to wild rumors on all sides. One popular but inaccurate Zonian rumor, fueled in part by references to the “American Canal Zone” in U.S. news media, that the Panama Canal Zone had been renamed “United States Canal Zone” and would henceforth be an outright possession of the United States.

News and rumor instantly traveled the 49 miles from Panama’s south coast to its north coast. The country’s second city, Colón, which abuts the city of Cristóbal, then part of the Canal Zone, erupted within a few hours after the start of hostilities on the Pacific side. Intense fighting continued for the next two days. Unlike in Panama City, Panamanian authorities in Colón had made early attempts to separate the combatants. Some incidents also happened in other cities all over Panama.

Here is a special report, as broadcast on January 9, 1964 by ABC Radio News.