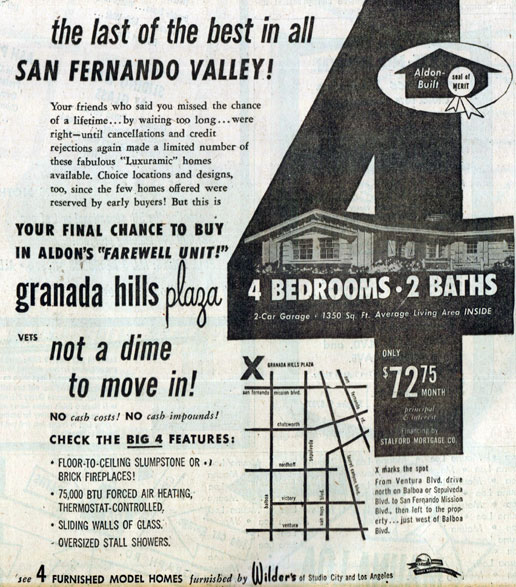 With visions of Orange Groves dancing in their heads.

With visions of Orange Groves dancing in their heads.

There was a time, if you lived in Los Angeles, that you would invariably say  you actually weren’t born in Los Angeles, but born somewhere, most likely the East Coast. The Great Migration West in the 1950s threatened to lay waste to most of the formerly industrial cities in the East for the balmy climate and open spaces of the West. The new industry was Aerospace and the former Defense plants that populated Southern California were being re-tooled to accomodate the Space Race, The Cold War and the promised wonders of new technology.

So people arrived in the millions, and what had been sprawling agricultural centers and vast orange groves were now being eroded away in favor of a sprawling Suburbia of tract homes and bedroom communities dotting every area of Southern California, from Santa Monica to Palm Springs.

By 1959 the Migration had reached fever-pitch. And this radio documentary, produced by CBS News and narrated by veteran newsman Howard K.Smith, attempts to put this migration mania in perspective; what it meant for many to pull up stakes and leave ancestral homes in favor of the promise of endless sun and eternal Summer.

Ironically, the broadcast aired on January 4, 1959 – smack in the middle of Winter. No doubt the message of year-round Summer wasn’t lost on many who tuned in from frozen points East. And it was probably responsible for several thousand more West Coast converts, if they hadn’t already been converted watching The Rose Parade a few days earlier.