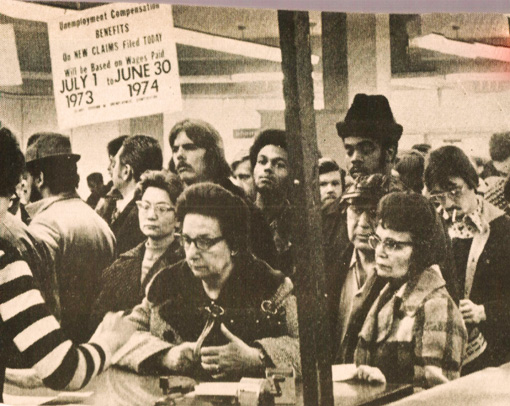 The other recurring nightmare: Unemployment.

The other recurring nightmare: Unemployment.

Click on the link here for Audio Player: News for Week Ending January 11, 1975

The plate was fairly overflowing with news and crises, this week ending January 11th in 1975.

Starting with news of the continuing War in Vietnam, or ” the recurring nightmare” as it was characterized by many on Capitol Hill. Despite a negotiated ceasefire that had been in place for 2 years, fighting had continued, pretty much as before. Reports from the Province of Phuc Long, 70 miles away from Saigon, tell of its capture by North Vietnamese and Vietcong and some 2,000 South Vietnamese casualties. Word of the loss drew speculation the U.S. would be drawn again into the conflict. Fueling that speculation were reports that a U.S. Naval task force was heading out of the Philippines towards, it was first thought, to Vietnam. It was later disclosed the task force was heading to the Indian Ocean.

Elsewhere in the world of conflict – tit-for-tat raids between Israelis and Palestinians cast further doubt on a peace settlement anytime soon, or even in the foreseeable future. The U.S. agreed to sell $750 million worth of Jet fighters to the Saudis and the Church Committee on Capitol Hill recommended cuts in Foreign Oil imports as a way of thwarting a potential oil embargo.

On the subject of Capitol Hill; President Ford was planning on unveiling his Energy and Economic plan at the upcoming State of The Union address.

The economic plan was eagerly anticipated since the latest figures on unemployment were grim and getting grimmer with each passing day. The only people hiring, it seemed, were the Unemployment offices who had been swamped in recent days with jobless claims. 1975 was already shaping up.

And so it went, and so it kept going, news for the week ending January 11, 1975 as reported on the CBS Radio program The World This Week.