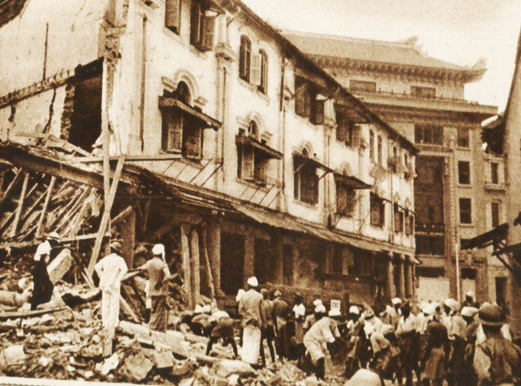 News for this day in 1942 was hopeful and grim, in equal portion.  The Battle for Singapore was on and fighting was taking place all over the Far East. American and Filipino troops were busy defending the Bataan area and the arrival of an Australian Expditionary force in Malaya was viewed as shifting the odds in the allies favor in the defense of Singapore. The BBC reported the Japanese suffered heavy losses in their latest raid over Rangoon with some 20% of their attacking planes being brought down. There had been no big raids on Burma since then.

In Mexico, the government announced it would no longer grant citizenship  to German, Japanese or Italian nationals. A censorship office for U.S. Mail had been established in Miami since so much mail from South and Central America and the Caribbean passed through the terminal in that city.

On the Eastern Front – reports from Germany claim the line in its invasion of Russia had been stabilized, whatever that meant. Later reports claimed otherwise with Russian advances taking place on several fronts. It wasn’t clear who was giving accurate assessments, but there was the infamous Russian Winter to take into consideration.

In Washington, noted Aviator Laura Ingalls (not to be confused with writer Laura Ingalls Wilder) was arraigned in Federal court on charges she failed to register as a German Agent. She was arrested by FBI agents on December 17th and held on $7,500 bail.

And a bulletin received during the newscast reported Australian troops on the West Malaya front wiped out a Japanese tank and infantry column during a pre-dawn raid.

All that, and a lot more via these Overnight news updates from WJZ, New York on January 16, 1942.