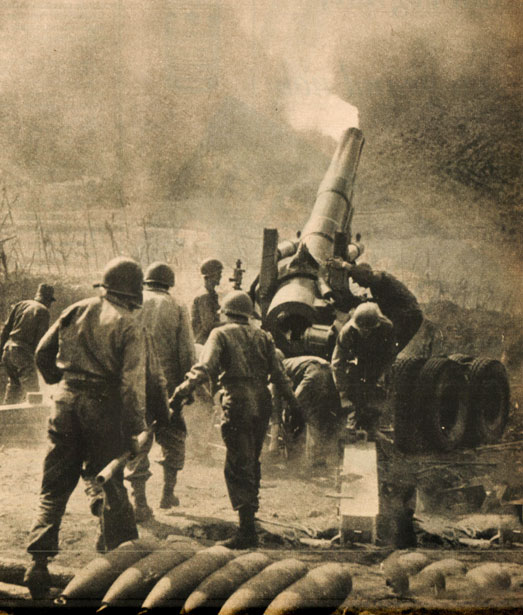 Korea: Another week of the "police action".

Korea: Another week of  “police action”.

Your subscriptions keep us going: Become a Patron!

News of this January 29th in 1951 began on an ominous note by way of 8th Army Headquarters in Korea when General MacArthur delivered a message to the world indicating the U.S. presence in Korea wasn’t going to go anywhere anytime soon. And that a solution to the conflict was entirely up to the Diplomatic sector to come to some settlement in the fighting.

The fighting in Korea continued, with urgent appeals to send more troops. Despite being regarded as a “police action”, the Korean situation was becoming a full-blown war.

And the subject of the Draft came up – with calls to begin calling up 18 year olds, which up to this point was avoided. It immediately sparked controversy and became a “hot-button issue” around Congress. But the writing was on the wall and “draft fever” was sweeping over college campuses.

But the question of just how far this war was going to go was the main topic of conversation all over the country this week. Opinions were sharply divided.

Meanwhile, Red China had rejected a UN Proposal for a ceasefire and offer of a peaceful settlement, and criticism of the UN was being felt all over the U.S., as many believed the UN wasn’t upholding its pledge to assist in the condemnation of Red China in the Korean conflict and label the Chinese as aggressors. It was also feared this lack of response would spell doom for the United Nations in general, saying its actions were putting on the fast track to wind up like the League Of Nations two decades earlier.

The Korean situation brought up the Cold War argument that the Soviet Union could easily jump into the fracas by threatening Europe, and that World War 3 was an inevitability.

That was the worse-case scenario, but a number of Political figures around Capitol Hill were jumping on it. The future was looking murky, only five and a half years since the conclusion of the last war.

And so it went, this week ending January 29, 1951. All that, and more as reported via NBC Radio‘s Voices And Events program.