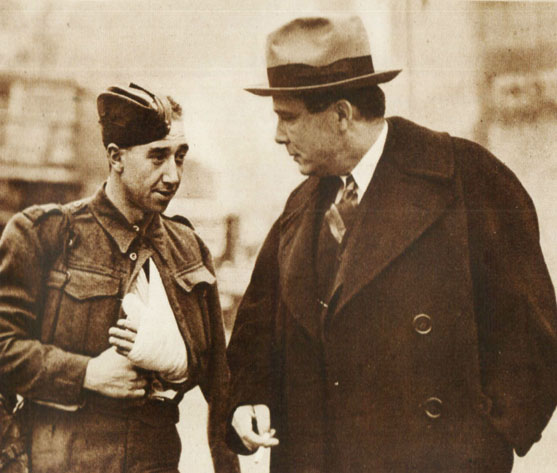 Wendell Wilkie on a fact finding mission from the U.S. - grim but resilient.

Wendell Wilkie on a fact finding mission from the U.S. – grim but resilient.

News for this last day of January in 1941 was a continuation of what had been going on months earlier. Continued daylight air raids over London and other industrial cities in Britain grew more vicious, but didn’t seem to daunt the resilience of the British people as the War went into its 520th day.

Former Republican Presidential candidate Wendell Wilkie was on a fact-finding mission in Britain, touring defense plants and bombed out cities, getting a first-hand view of how Britain was weathering the War.

Meanwhile in Germany, Hitler had delivered another of his “confident and contemptuous” speeches to the German people, monitored and reported on in Britain the night before. Seen as more of a pep-talk for a nation growing weary of the war and interested in a “quick peace”, it was noted that Hitler was now threatening the U.S. and this was seen as  not a good sign on Germany’s part.

The financial cost of the war was a topic of discussion in Parliament, with reports that Britain alone was spending $36 million per day and calls for new loans were being considered.

From Rome came reports the Italian Army had abandoned Derna in North Africa, escaping the risk of being surrounded by British forces advancing in that region.

From Berlin came reports on reactions to Hitlers latest speech. It was noted that Hitler had taken to using irony and sarcasm in his speeches more now and it was also noted that his threats to use force against U.S. ships coming to the aid of Britain were seen as a more heated warning against U.S. involvement in the war. No mention of an imminent invasion of Britain anymore, but a stepped up campaign of U-Boat attacks on British shipping.

From Capitol Hill it was reported the thinly-veiled threats toward the U.S. contained in Hitler’s  speech  served to cement Congress’ resolve to pass the new Lend-Lease Bill, continuing shipments  of aid to Britain.

It was also learned that Siam (now Thailand) was demanding the Vichy government of France hand over the colonies of Indochina and Cambodia and eventually relinquish all colonial stakes in the region.