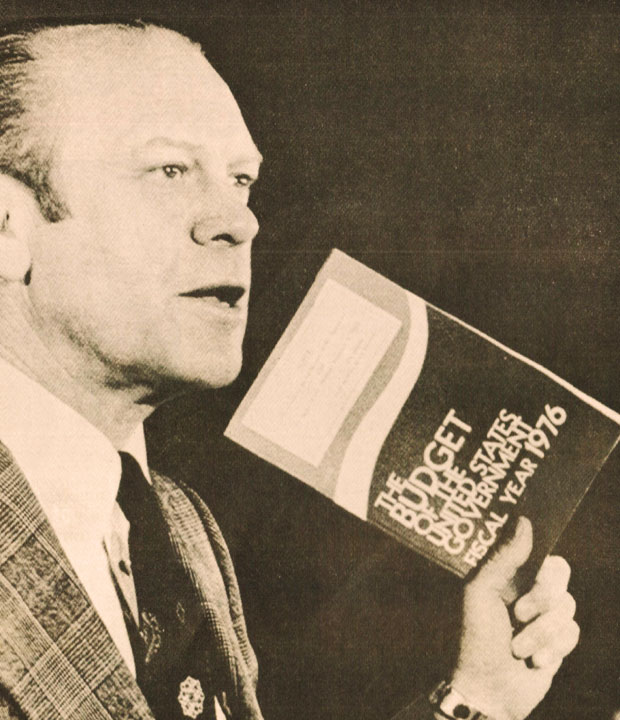 Behold! The Bearer Of Bum Tidings.

Behold! The Bearer Of Bum Tidings.

Click on the link here for Audio Player: News for Week ending February 1, 1975

Somehow, it always winds up being about the Economy. This first day of February in 1975 was all about the Budget and President Ford‘s proposal for Fiscal Year 1976. It was also about unemployment figures, which were going up. Sales, which were going down and our productivity, which was hovering around rigormortis.

No easy way to put it – things were rotten, this day in 1975. Even with the optimistic and catchy-phrased Whip-Inflation-Now campaign, 1975 was heading into the doldrums quickly. And we were barely two months into it.

Of course, we weren’t the only ones dealing with it. The rest of the world, it seemed, was in the same boat. Little comfort, but comfort nonetheless.

Ford also asked for increased funding for the wars in Southeast Asia, which Congress gave a pass to. Not because of the additional monies being asked for, but because it was increasingly looking like we were throwing good money after bad. The situation in Southeast Asia seemed frozen just about to where it originally was in 1954. And Congress felt enough was enough.

Military funding to Turkey was scheduled to come to an abrupt halt at Midnight on February 1st, if Turkey hadn’t come to a settlement over the issue of Cyprus. Congress just wasn’t in a spending mood, particularly since Turkey really had no effective government running things at the time.

And the Middle East was continuing to make news, with Egypt’s President Anwar Sadat visiting Paris to discuss the never-ending Peace settlement proposals. Sadat left the talks insisting French President Valery Giscard d’Estaing be part of the talks scheduled for Geneva later. Israel wasn’t thrilled at the idea, since the French were selling jets to Egypt and had also recognized the PLO, insisting they also be included in the peace proposal talks as well.

A jumbled and crazy week, that started this month of February in 1975, as reported on the CBS Radio program The World This Week, for February 1, 1975.