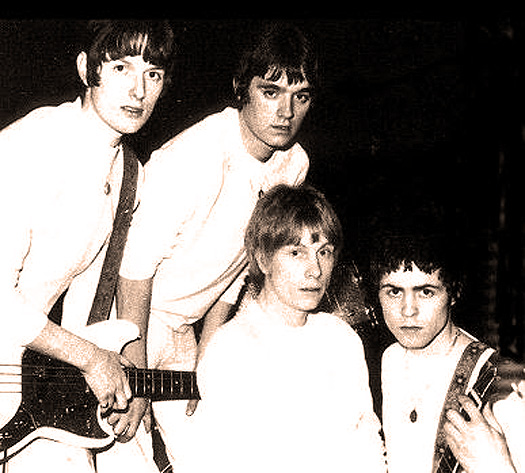 John's Children circa 1967 - blame it on the guy in the front row on the right.

John’s Children circa 1967 – blame it on the guy in the front row on the right.

A band more people have probably heard about than actually heard, John’s Children were one of those fabled “you-had-to-be-there” bands that loomed high in the pantheon of Psychedelia, but in fact released only one (sort of) album and a string of singles and became largely known as the band that springboarded Marc Bolan‘s career.

The story of John’s Children begins in 1965 in Great Bookham, where drummer Chris Townson, guitarist Geoff McClelland, harmonica-player Andy Ellison, and singer Louis Grooner played in a band called The Clockwork Onions. With changing times and line-ups came changing names and The Clockwork Onions became The Few. After the departure of keyboardist Chris Dawsett The Few became The Silence, who were Andy Ellison, Chris Townson, Geoff McClelland, and John Hewlett. The Silence were described by Yardbirds manager Simon Napier-Bell as “positively the worst group I’d ever seen” and not surprisingly he insisted on becoming their manager.

Napier-Bell changed The Silence’s name to John’s Children. The band — actually a group of session musicians — recorded John’s Children’s first single, “The Love I Thought I’d Found” b/w “Strange Affair,” which was released in 1966. The original title of the A-side was “Smashed Blocked” but a name change was necessitated at home because it was deemed offensive. Far from Surrey the single found a receptive audience (where it was released with its original name) in Florida and California — two American states both known for their production and appreciation of weird, unpolished garage rock.

In 1967, John’s Children released their second single, “Just What You Want – Just What You’ll Get” b/w “But You’re Mine” was also recorded by session musicians — something which was back then still somewhat common practice even for bands composed of technically talented but commercially unproven instrumentalists. The single fared better than its predecessor and after the release of a “lost” third single, “Not the Sort of Girl (You’d Like to Take to Bed),” their American label, White Whale Records, requested a full-length album.

John’s Children recorded Orgasm. The album kicks off with the shrill screams of young female fans. After someone pleads with the audience to stop screaming, which doesn’t stop them, the band launch into “Killer Ben,” which only elicits louder screaming. The album was, in fact, recorded in a studio and the audience screams were nicked from the soundtrack to The Beatles’ A Hard Day’s Night. Toward the end of “You’re a Nothing,” it sounds like additional crowd noise has been lifted from a football match.

Their singles were banned from The BBC almost at the get-go. So their appearances there were rare, to say the least.

And here’s what’s on the player:

Bolan would leave the band soon after and launch the career that made him a household name. But in 1967, it was all still very experimental.

Technical note – this broadcast sounds amazing – except for Daddy Rolling Stone, which is from another source. But rather than leave it out, it’s included because of the sheer historic importance of this appearance.