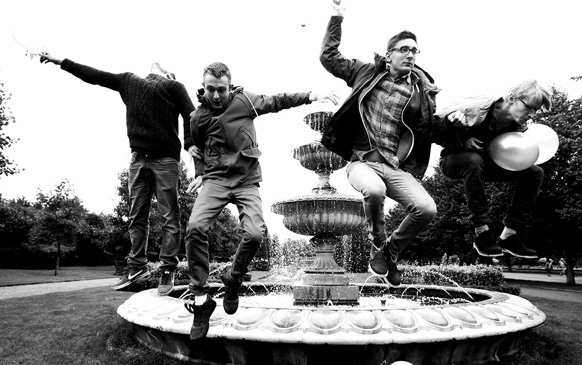 Alt-J - Formerly known alternately as The Movies or Daljit Dhaliwal - the settled on a keyboard symbol instead.

Alt-J – Formerly known alternately as The Movies or Daljit Dhaliwal – they settled on a keyboard symbol instead.

It’s hard to believe that Festival season 2013 will be starting up in only a few weeks. I admit to not actually getting through all the recordings from all the festivals from last year that have been sitting, waiting to hit the play button.

If anything, it signifies an embarrassment of riches is to be had – probably more so, if the previews of coming attractions are any indication. By all indications, it would seem Music is alive and well and flourishing, and reports of its demise (at least from the majors standpoint of view) appear grossly exaggerated.

For example, tonight’s entry. Alt-J are a UK alternative/folk/experimental/electronic/independent band that haven’t been around all that long – actually getting off the ground in their present incarnation only last year. I had never of them before, even under their previous names, which included The Movies and a short stay as Daljit Dhaliwal (I’m sure there was a conflict, being named after someone who is very much alive and kicking).

Here they are at Route du Rock Festival in the Brittany region of France, recorded on August 10th of last year by the ever-amazing FIP channel of Radio France.

Where they will appear this year is anyone’s guess. But I’ve been reminded by the folks at Route du Rock that it’s a little over 25 weeks until the next one. So anything is possible. They are currently on tour in Europe and are slated to play Hamburg, Cologne and Berlin over the next couple of weeks. Starting in March they are heading to the U.S., eventually making it to San Francisco on April 10th.

In the meantime, here’s a taste from last year and a reminder to get to a festival this Summer. It’s the best place to expand your horizons.