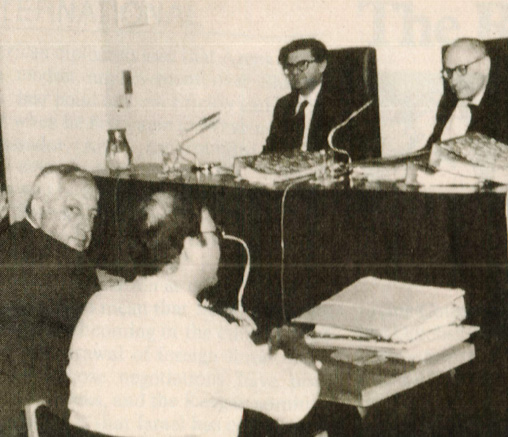 Ariel Sharon In the hot seat - testifying over the Beirut massacre.

Ariel Sharon In the hot seat – testifying over the Beirut massacre.

At the end of a week of heated debate, on this February 8th in 1983, it was determined by an Israeli government commission that Defense Minister Ariel Sharon and others in the Israeli cabinet were guilty of “indirect responsibility” for the massacre of some 700 Palestinian refugees by Christian Phalangists in Beirut Lebanon in September of 1982.

The verdict didn’t end the controversy. It was determined by the Commission that Sharon resign his post, which Sharon refused to do and which Prime Minister Menachem Begin refused to step in by firing the Minister. The result was massive protest on the streets of Israeli cities, both pro and con in what was considered the worst moral dilemma Israel faced since its inception.

Washington remained silent with no public comment. Even though it was rumored the Reagan White House was in favor of Sharon’s removal as it was determined Sharon’s remaining in position was considered an obstacle in the Reagan Peace Plan for the region.

In other news –  The Trucker’s strike was taking a violent turn as Truckers, in increasing numbers, were returning to work. Transportation Secretary Elizabeth Dole declared the strike a failure.

New England was digging out from 2 feet of snow, falling the night before from what was considered an unusually mild winter throughout the country.

And it was determined President Reagan would be running for re-election in 1984 and, according to House Speaker Thomas P. “Tip” O’Neil, the Democrats should plan accordingly.

And so it went – for February 8, 1983 as reported via CBS Radio Hourly News and CBS News Business Update.