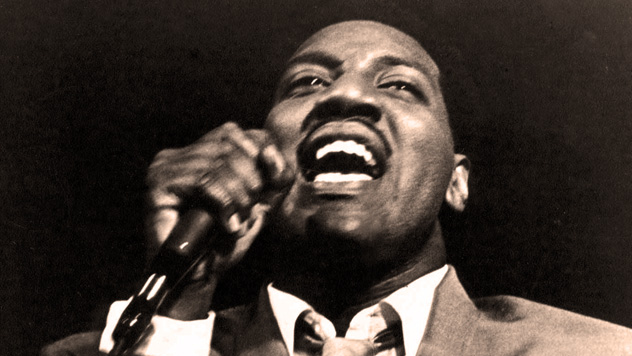 Otis Redding - The one - The only. (Photo: Paul Acree)

Otis Redding – The one – The only.(Photo: Paul Acree)

The immortal Otis Redding this week, recorded in concert at an unidentified venue (I’m thinking Baltimore? – call for clarification from readers please!) on October 4, 1966.

I forgot how turbo-charged Redding was in performance. This concert (actually two half-hour sets with an intermission in between) rocks almost continuously for over an hour.

In late 1966, Redding returned to the Stax studio and recorded several tracks, including “Try a Little Tenderness”, written by Jimmy Campbell, Reg Connelly and Harry M. Woods in 1932. This song had previously been covered by Bing Crosby and Frank Sinatra, and the publishers unsuccessfully tried to stop Redding from recording the song from a “negro perspective”. Today often considered his signature song, Jim Stewart reckoned, “If there’s one song, one performance that really sort of sums up Otis and what he’s about, it’s ‘Try a Little Tenderness’. That one performance is so special and so unique that it expresses who he is.” On this version Redding was backed by Booker T. & the M.G.’s, while staff producer Isaac Hayes worked on the arrangement. “Try a Little Tenderness” was included on his next album, Complete & Unbelievable: The Otis Redding Dictionary of Soul. The song and the album were critically and commercially successful—the former peaked at number 25 on the Billboard Hot 100 chart and at number 4 on the R&B chart.

The spring of 1966 marked the first time that Stax booked concerts for its artists. The majority of the group arrived in London on March 13, but Redding had flown in days earlier for interviews, such as at “The Eamonn Andrews Show”. When the crew arrived in London, the Beatles sent a limousine to pick them up. Booking agent Bill Graham proposed that Redding play at the Fillmore Auditorium in late 1966. The gig was commercially and critically successful, paying Redding around $800 to $1000 (US$7,880 in 2019 dollars) a night. It prompted Graham to remark afterward, “That was the best gig I ever put on in my entire life.” Redding began touring Europe six months later.

It’s a tribute to the talent and raw energy this man had, and just what it sounds like for an artist to throw themselves into their work.

Redding was an astonishing performer, above his remarkable gift as an artist and writer. He really was an institution.

And here is an hour’s worth of why.

The sound is a bit rough, but hopefully it’s been smoothed out from some magical surgery I spent a few hours performing. It’s a frantic 71 minutes though.