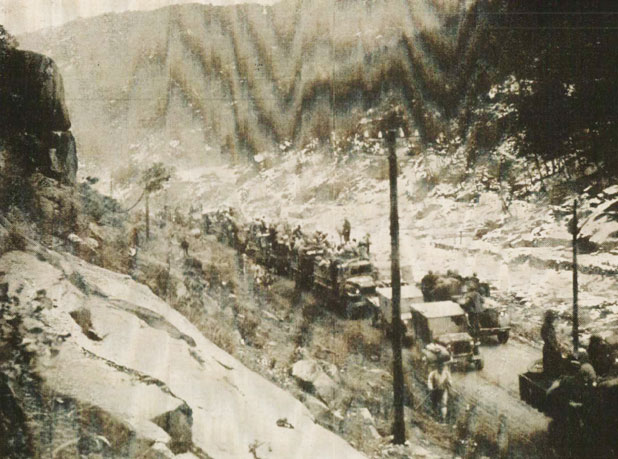 A new phrase in Korean War slang: "Buggin' Out Tonight".

A new phrase in Korean War slang: “Buggin’ Out Tonight”.

Click on the link here for Audio Player: News for February 13, 1951

Despite General MacArthur‘s spin that “we are continuing a war of maneuver”, a new phrase had entered into the Korean War Slang dictionary; “Buggin’ out”. On this February day in 1951, United Nations forces and the U.S. Army were in the process of retreating on several fronts, while coming  under attack on several others. Although most attacks were directed at South Korean forces, the UN allies were bearing much of the brunt in what was feared in becoming the long-drawn out and costly war.

In other news – The UN voted down two Soviet demands, condemning U.S. involvement over Korea and a U.S. Naval presence off Formosa. Warm wishes and parades on the parts of both The Soviet Union and People’s Republic of China went on today,  celebrating the first anniversary of the  Soviet/Chinese alliance.

On Capitol Hill – Senator Lyndon Johnson urged the drafting of 18 year olds. General Hershey (of Draft Board fame) said there was no need to draft Women, as there were more than enough volunteers and not enough space for Women at the moment.

The director of Nuclear Naval Research, Dr. Lidell dismissed the current craze of Flying Saucer sightings by stating that, what people were actually seeing were plastic balloons being used in Cosmic Ray research, and nothing more sinister than that.

Secretary of The Interior Chapman  declared that the United States had reached the bottom of the barrel in natural resources and that we were consuming far faster than we were replenishing. Remember; this is sixty-two years ago,we’re talking about.

And South Carolina voted to discard the Poll Tax.