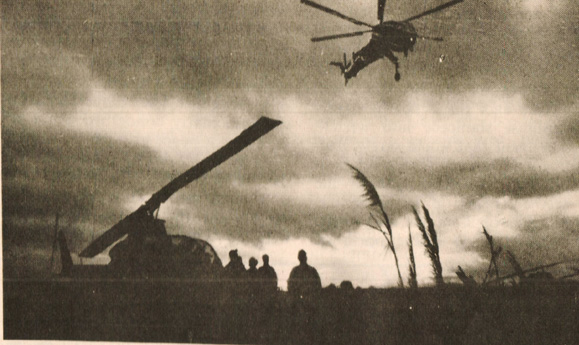 Excursion in to Laos - pay no attention to the sound of several hundred helicopters landing.

Excursion to Laos – pay no attention to the sound of several hundred helicopters landing.

Click on the link here for Audio Player: News for February 15, 1971 – Laos Invasion

Not bad enough public opinion railed against U.S. involvement in Cambodia in 1970, in 1971 the war  now extended to Laos with U.S. and South Vietnamese troops crossing the border into Laotian territory amid a news blackout that wasn’t actually reported until this day in February, 1971. The “excursion” initially took place on January 30, but word was deliberately slow in coming out and this only added to a situation in Southeast Asia where the American people had grown intolerant and wanted an end.

It’s interesting how the White House took great pains to discount reports of U.S. troops, saying only “advisers” had been involved. And even at that, only a limited number of Americans were there and weren’t actively engaged in the fighting going on.

You get some idea, if you are coming to hearing about the Vietnam War and our involvement in Southeast Asia recently, just how twisted and convoluted it all was.

And how hearing this news on this day in 1971 just added to the frustration and anger.

Here is that special broadcast from NET, as broadcast on the evening of February 15, 1971.