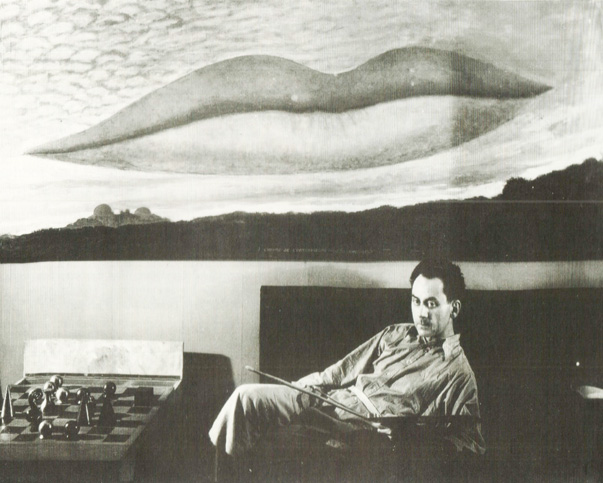 Man Ray with one of his iconic paintings.

A Few Words From Man Ray – Past Daily Pop Chronicles

Man Ray with one of his iconic paintings.

Click on the link here for Audio Player: Man Ray

As one of the cornerstones of the Avant-Garde, Dada-Surrealist and Modernist Movements, Man Ray is probably best known for his painting, A L’Heure de L’Observatoire – Les Amoureux (Observatory Time – The Lovers) – which you can see in the photo above, as well as his experimental photography.

But like many artists, very little is actually heard from them – few, if any interviews with artists from this period of time (post-World War 1), and certainly representing this Movement were given.

So this recording is something of a rarity – more of an audio autobiography than an interview. Man Ray talking about Man Ray and the world in which he lived and the art which he created.

Since Man Ray died in 1976, it’s presumed this interview/audio auto-biography took place somewhere in the late 1960s/early 1970s, and I believe it was done originally in conjunction with an exhibition of his works being put on at one of the major museums.

No doubt you’ve seen the famous painting and the Photography probably wondered who was behind it.

Here he is. So now you know.