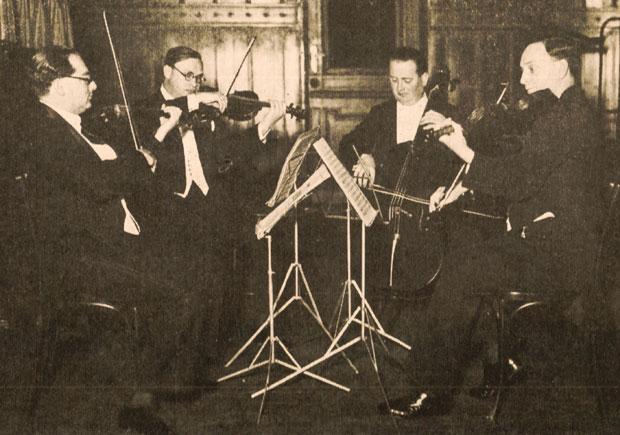 The Roth Quartet - one of the groups most responsible for premiering new American Music in the 1930s and 1940s.

The Roth Quartet – one of the groups most responsible for premiering new American Music in the 1930s and 1940s.

Taking a break this week from our perusal of French Radio transcriptions for another dose of Americana, this time by way of Roy Harris, a composer whose work and recognition have been pretty much limited down to one symphony of late – but a composer whose work needs serious revisiting and rediscovery.

This weekend it’s a performance, recorded for Columbia Masterworks on June 13, 1940 and June 6, 1941 by the venerable Roth String Quartet of Roy Harris’ String Quartet No. 3, from 1937.

The Roth Quartet and, to be fair, a few others, were one of the backbone groups working in the U.S. , devoting themselves to unfamiliar and new works. There was a time in the 1930s where, if the Roth’s were going to play your work, you had arrived. So indelible were they in the cause of presenting new music they have hardly been surpassed over the past few decades.

Harris was a champion of many causes. He founded the International String Congress to combat what was perceived as a shortage of string players in the U.S., and co-founded the American Composers Alliance. In 1958 the U.S. State Department sent him, along with some fellow composers including Peter Mennin and Roger Sessions, to the Soviet Union as a “cultural ambassador”; he was impressed by the support for composers that the Soviet state provided, not aware at the time of how carefully his visit was managed. He was a tireless organizer of conferences and contemporary music festivals and a frequent radio broadcaster. His last symphony, a commission for the American Bicentennial in 1976, was mauled by the critics at its first performance. This may have been due to its themes of slavery and the Civil War, which were in contrast to the celebratory mood of the country.

Although the rugged American patriotism of his works of the 1930s and 1940s is reflected in his research into and use of folk music (and to a lesser extent of jazz rhythms), Harris was paradoxically obsessed with the great European pre-classical forms, especially the fugue (which we hear in the Third Symphony) and passacaglia (as featured in the Seventh). His customary mode of musical discourse, with long singing lines and resonant modal harmonies, is ultimately based on his admiration for and development of Renaissance polyphony. He also used antiphonal effects, which he exploited brilliantly with a large orchestra. Like many American composers of his time, he was deeply impressed by the symphonic achievement of Sibelius.[citation needed] In Harris’s best works the music grows organically from the opening bars, as if a tiny seed gives birth to an entire tree. This is certainly the case with the Third Symphony, which joined the American repertoire during the same era as works by Aaron Copland and Virgil Thomson. The first edition of Kent Kennan’s The Technique of Orchestration (1952) quotes three passages from this symphony to illustrate good orchestral writing for cello, timpani, and vibraphone, respectively. The book quotes no other Harris symphonies. Few other American symphonies have acquired such a position in the standard performance repertory as has this one, due in large part to the championing of the piece by Leonard Bernstein, who recorded it.

Though Harris’s symphonies are his greatest contribution to American music, he composed over 170 works, including many works for amateurs. His output includes works for band, orchestra, voice, chorus and chamber ensembles.

Maybe that can turn around.