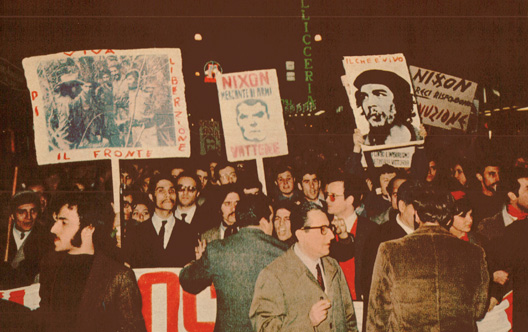 Not everybody was wild about Nixon coming to visit, especially Rome.

Not everybody was wild about Nixon coming to visit, especially Rome.

Click on the link here for Audio Player: News for February 22, 1969

News on this Washington’s Birthday in 1969 had much to do with the anticipated European visit of newly inaugurated  President Nixon. It also had something to do with a just-published biography of George Washington by author-historian Mary Higgins Clark, and revelations over what were previously conceived notions as to who the Father-Of-Our-Country really was.

But the news began with reports on the upcoming Nixon visit and how people felt about it.  News from West Berlin disclosed a newspaper report the East Berlin authorities would be willing to permit Easter East-West Berlin visits, if West Berlin decided to drop the notion of elections in West Berlin in March. Visits were cut-off in May of 1966 and not resumed. No comment from the Bonn government. The Soviet Press went on to say the West Berliners were deliberately trying to stir up tensions between the Soviet Union and the U.S. by holding the elections. Reports from France also denied French President DeGaulle was planning on introducing a plan that would disband NATO and the European Common Market, replacing it with a Four-Power alliance that would include France, Britain, West Germany and Italy, but exclude the U.S. The French Press Office blamed the British Press for starting the rumor.

Meanwhile, in Vietnam – 48 B-52 bombers targeted suspected North Vietnamese positions north of Saigon, dropping some 1400 tons of explosives in the process. The Tet holiday ceasefire also ended today and fighting went back on schedule.

Some 15,000 West Virginia Coal Miners went off the job in a wildcat strike over the lack of Coal Industry involvement in doing anything regarding lung disease prevalent in mining operations.

And an interview with Historian-Author Mary Higgins Clark revealed that much of what the country knew about George Washington was actually made up by a traveling minster who didn’t really know the President at all, but his colorful stories were repeated so much they became legend. The infamous Cherry Tree incident was a fabrication. Martha Washington was, for all intents and purposes, a hottie and not the middle-aged dowager she was portrayed as. She was also never called Martha, but rather, Patsy. And George, it was learned, was quite the snappy dancer.

The wooden false teeth however, weren’t fabricated which led people to joke “the only thing he could give a woman were splinters.”

Little known facts, for this Washington’s Day in 1969 as presented by NBC-Monitor‘s News on The Hour for February 22, 1969.