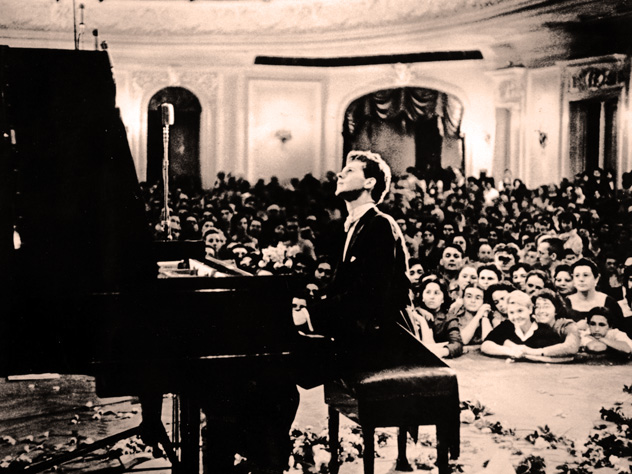 Van Cliburn in Moscow - 1958 - Did more to improve East-West relations than all the Politicos combined.

Van Cliburn in Moscow – 1958 – Did more to improve East-West relations than all the Politicos combined.

Only two months into 2013 and there have been way too many tributes to the passings of legendary and influential musicians. And as of today, there is another one. The sad news of the passing of Van Cliburn, the pianist who put the Cold War of the 1950s into a state of suspended animation and made us forget East-West tensions as he took the music world by storm, winning the 1958 Tchaikovsky Piano Competition in Moscow.

His charm and mastery of the instrument made him the instant idol of millions of piano students, and his name became a household symbol of what you could do if you practiced hard enough. Every student of Classical music wanted to be Van Cliburn, it seemed.

So as tribute to the passing of this giant in the world of the Performing Arts and a reminder of his magic and deft command of the instrument, here are two concerts, both featuring the Boston Symphony conducted by Erich Leinsdorf and both recorded in 1964. The first one (the top player) features Brahms Piano Concerto No. 1 and the second (the bottom player) features Liszt’s Piano Concerto’s Number 2 and 1 (in that order as they were performed).

The Brahms was given at the Tanglewood Festival in July of 1964 and the Liszt was given at a regular concert given in November of 1964.

A unique and influential voice – sadly stilled and much missed.