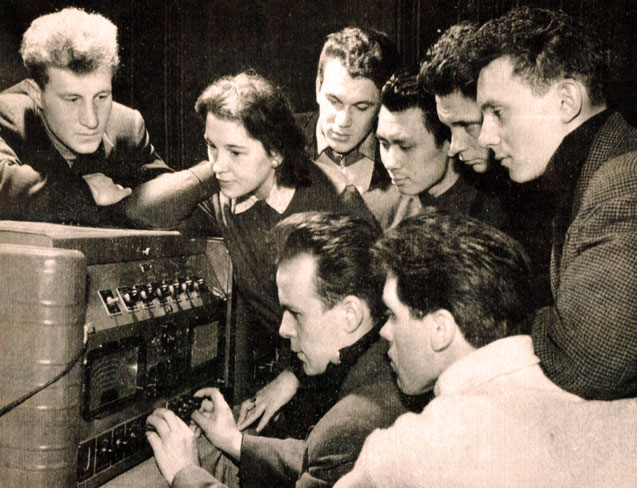 The coldest part of the Cold War.

The coldest part of the Cold War.

One of the constants during the Cold War period was the War of Words waged between the U.S. and the Soviet Union. This broadcast, from Radio Moscow on March 7, 1947 is no different.

Featuring news of the day, there are no shortage of barbs directed at the Allies in the course of what are typical events during a typical day in the Soviet Union.

So news on this day in 1947 had to do with the arrival of delegates to the Foreign Ministers Conference in Moscow, including Secretary of State George C.Marshall, British Foreign Minister Bevin and French Minister Bidault. Marshall gives a statement to the Soviet Press saying it’s his first trip to Moscow and he was looking forward to a productive meeting.

In other news – The Soviet Trade Union delegation returned to Moscow after attending the Amalgamated Trade Union Conference in The Netherlands, saying the Dutch were disgruntled with Britain and the U.S. and were looking forward to a closer working relationship with The Soviet Union.

Next up was a review of New Inventions And Methods from 1946, highlighting Soviet discoveries in the field of Science and Industry.

Other news – A Budapest court found a group of individuals guilty of plotting an unsuccessful overthrow of the Hungarian Republic. No word on who the individuals were or what the sentence was going to be.

And The Soviet Union was celebrating International Women’s Day with a number of festivities planned all over Russia and the Bloc.

The rest of the newscast was given over to a review of Soviet Newspapers.

Fascinating stuff – and this was early on in the Cold War period.

And so went the news via this news cast from Radio Moscow for March 7, 1947.