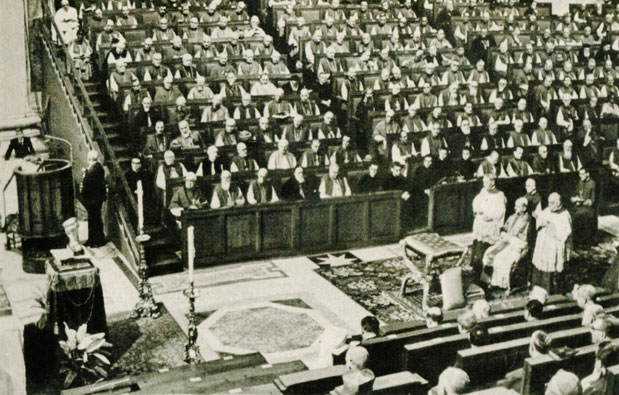 Vatican II - Day One. All civil at first.

With the current wave of scandal and turmoil going on at The Vatican, it’s interesting to note that scandal and turmoil are no strangers to that particular neighborhood in Rome. While the meeting gets started this week to select a new Pope, I ran across this broadcast regarding another wave of turmoil that enveloped The Vatican in 1964. The Vatican II proceedings and the intense political wrangling that went on during those 10 weeks in 1964.

This documentary, hosted by CBS Rome correspondent Winston Burdett, discusses the factions involved in what was pretty intense in-fighting. The factions of Progressive versus Conservative Bishops, Cardinals and the infamous Curia of the Roman Catholic Church.

All seemed to be going reasonably well, except for an eleventh hour skirmish brought on by the conservative element at The Vatican, causing the Progressive element (ironically, mostly Americans) to circulate a petition and hand it directly to Pope Paul VI.

The Pope, in turn refused to get involved, leaving it to the Bishops and Cardinals to fight out.

So this documentary outlines what went on, who was responsible and what happened.

Fascinating stuff, if you’re not all that familiar with Vatican II and the goings on in the Catholic Church almost 50 years ago.

You begin to see a pattern here.

Here is that documentary, Drama At The Vatican, produced by CBS News and aired December 10, 1964.