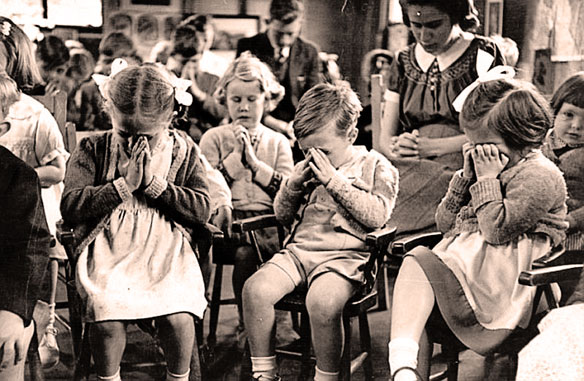 Fifty years ago today, on March 13, 1963, CBS Reports broadcast a documentary on the famous Engel vs. Vitale Supreme Court case regarding prayer in Public Schools. The decision was rendered in 1962, but the controversy continued. And still continues to this day.

The whole question of Separation of Church and State and at what point does the First Amendment cross the line, and who determines whether prayer in a class is voluntary, who’s version of God are we talking about? What about people who don’t believe in God, or don’t believe in an organized religion version of God?

A delicate question, and one which proponents of School Prayer easily argued in 1962 that the banning of School Prayer was the act of “godless Communists”. In 1962 it was easy to heap every question of action in our society as being the work of Communists – they were the easy target back then. Communists were blamed for the Civil Rights movement, so why not everything else?

Today the argument has changed, but not by much. Skipping the simple issue of Prayer, it’s now the argument over the re-writing of school text books – to teach Creationism. To force out fair-minded School Board members in favor of Fundamentalist-leaning practitioners.

But fifty years ago it was simpler, but no less charged.

Here is that documentary regarding the Engel vs. Vitale case and how it impacted the educational systems in many parts of this country.

And sometimes it just goes around in circles.