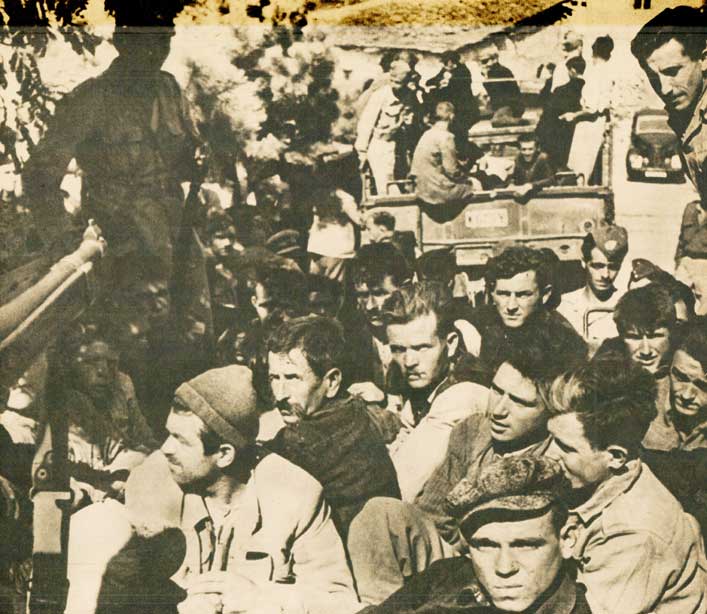 IIn Greece - Rounding up the rebels.

Greece – Rounding up the rebels.

News for this first day of Spring in 1947 bears an eerie similarity to news today. This day in 1947 it was about the economic crisis spreading throughout Europe, with Greece and Turkey in the grips of dramatic political and social upheavals. The Post-War climate of shortages, refugees and the dreaded austerity measures were running neck and neck with the creeping Cold War atmosphere of Soviet influence being spread and promoted throughout the region. Concern that Greece might fall into the rapidly assembling Communist bloc had many scrambling for a solution. President Truman proposed an emergency relief package of some $400 million to be sent to Greece immediately, as fighting between rebels and government forces continued amid threats of a Rebel Spring offensive in the Balkan region aimed directly towards Athens. The anti-government fighting was blamed largely on austerity measures the Greek Government had imposed because of the economic crisis, forcing many living in outlying villages to take up with the rebel cause. Further escalating fears of a toppled Greek government was the disclosure from London that all British troops were to be removed from Greece by August, 1947. The largely non-Communist Greek rebels had been so discouraged by the lack of assistance from Washington that many felt the only way around catastrophe was a brokered peace by an International Authority (i.e. United Nations). The UN confessed to not having either the military power or the economic means of achieving that. And so it went.

Meanwhile, the Big Four Conference in Moscow was proceeding along, somewhat uneasily, with questions over the situation in Austria being brought up, as well as the formation of new political parties in Germany, which the Russians weren’t too happy about. Britain proposed a provisional German Constitution to be approved by the Allied Council. The Constitution would be subject to amendments, once elections were held in Germany. The Constitution would provide for a President of Germany and two Chambers; each chamber representing all the provinces. The proposal also called for the establishment of a Supreme Court to safeguard the Constitution. Other provisions, such as establishing a German military, reparations, war criminals and control of exchange would still be under Allied control. The French, however were expected to strongly oppose any notion of a strong central government for Germany, whether provisional or otherwise.

And then there was the weather – with Britain being lashed by gale force winds and a pessimistic forecast of worsening conditions and continued flooding in the coming days. The operative words for this first day of Spring in England were; Higher Ground. None of this was have any positive effect on the British economy, as damage to crops was predicted to create famine conditions in the UK for at least the coming three months.

On Capitol Hill, the release of a report to Congress from Dean Acheson at The State Department marked “secret” had both houses buzzing with questions. The report came on the heels of the Truman Doctrine Aid for Greece and its contents were rumored to have something to do with the current political/economic climate in Athens.

That, and much-much more was what this first day of Spring sounded like, as reported on the NBC World News Roundup and News Of The World broadcasts for March 21, 1947.