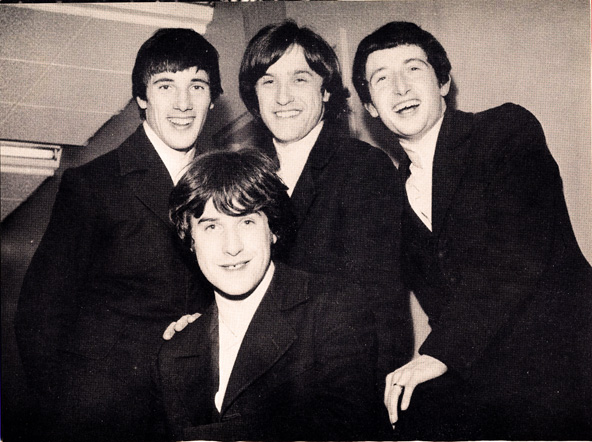 The Kinks - despite the squeaky clean exterior - the interior was mayhem.

The Kinks In Session – December 1964 – Past Daily Weekend Soundbooth

The Kinks – despite the squeaky clean exterior – the interior was mayhem.

A Little goes a long way: Become a Patron!

Continuing the perennial favorites tonight with a session recorded by The Kinks for the BBC’s Top Of The Pops program in December, 1964.

Always one of the more adventuresome and original of the initial British Invasion bands of the early 60s, The Kinks managed to weather all the changes in musical genres and still maintain a freshness that has gone on for decades.

The band’s first single was a cover of the Little Richard song “Long Tall Sally”. Bobby Graham, a friend of the band, was recruited to play drums on the recording. He would continue to occasionally substitute for Avory in the studio and play on several of the Kinks’ early singles, including the early hits “You Really Got Me”, “All Day and All of the Night” and “Tired of Waiting for You”. “Long Tall Sally” was released in February 1964, but despite the publicity efforts of the band’s managers, the single was almost completely ignored. When their second single, “You Still Want Me”, failed to chart, Pye Records threatened to annul the group’s contract unless their third single was successful.

“You Really Got Me” (1964) features a jagged, distorted guitar riff, created by Dave Davies’ cutting the speaker cone in an amplifier. The Kinks’ first hit, it topped the British charts and reached number seven in the United States.
Problems playing this file? See media help.
“You Really Got Me”, a Ray Davies song, influenced by American blues and the Kingsmen’s version of “Louie Louie”, was recorded on 15 June 1964 at Pye Studios with a slower and more produced feel than the final single. Ray Davies wanted to re-record the song with a lean, raw sound, but Pye refused to fund another session; Davies was adamant, so the producer, Shel Talmy, broke the stalemate by underwriting the session himself. The band used an independent studio, IBC, and went in on 15 July, getting it done in two takes. The single was released on August 1964, and, supported by a performance on the television show Ready Steady Go! and extensive pirate radio coverage, it entered the UK charts on 15 August, reaching number one on 19 September. Hastily imported by the American label Reprise Records, it also made the Top 10 in the United States. The loud, distorted guitar riff and solo on “You Really Got Me”—played by Dave Davies and achieved by a slice he made in the speaker cone of his Elpico amplifier (referred to by the band as the “little green amp”)—helped with the song’s signature, gritty guitar sound. “You Really Got Me” has been described as “a blueprint song in the hard rock and heavy metal arsenal”, and as an influence on the approach of some American garage rock bands. After its release, the group recorded most of the tracks for their debut LP, simply titled Kinks. Consisting largely of covers and revamped traditional songs, it was released on 2 October 1964, reaching number four on the UK chart. The group’s fourth single, “All Day and All of the Night”, another Ray Davies hard rock tune, was released three weeks later, reaching number two in the United Kingdom, and number seven in the United States. The next singles, “Set Me Free” and “Tired of Waiting for You”, were also commercially successful, the latter topping the UK singles chart.

Here’s the song that got it all started, along with an interview, Cadillac and huge follow-up hit, All Day And All Of The Night.

Doesn’t really seem to age at all.