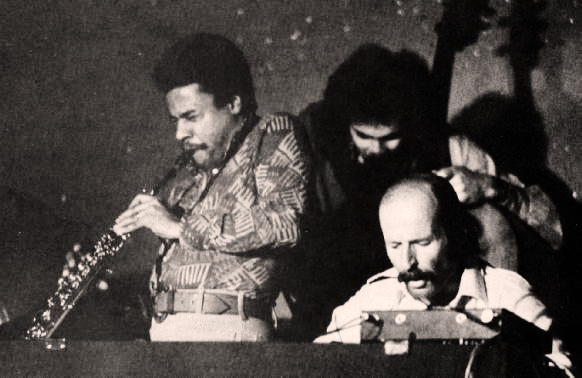 Weather Report - along with Miles Davis, provided the radical kick in the ass of Jazz.

Weather Report – along with Miles Davis, provided the radical kick in the ass of Jazz.

Click on the link here for Audio Player: WeatherReport1971-07-27InternationalMusicForumStiftshoffOssiachAustria

One of the earliest known live concerts by the groundbreaking Jazz/Funk/Fusion band Weather Report, recorded during their initial tour of Europe in 1971 by Austrian Radio.

Weather Report, along with the pioneering change in direction of Miles Davis and his influence on John McLaughlin who formed The Mahavishnu Orchestra did a lot to galvanize a whole new sub-genre in Jazz. It was also a major influence among Rock bands in the early 1970s, signaling the Progressive Movement throughout Europe at the time.

Like all new direction changes, it was met with a lot of resistance. Jazz purists derided it for being too radical and not really Jazz. Rock critics derided the new Progressive Movement, saying it was pretentious and too much like Jazz to really be considered Rock.

Fortunately, for the music world the pioneers had no intention of giving up, and that period has been looked at as exciting in retrospect.

This is as complete a recording of that early period of Weather Report as is possible. Undoubtedly more will show up as the Radio outlets take a look at their archives and see what’s really hiding in there.

Shortly after this tour, the band lineup would change. So this recording is doubly rare, as this is the original lineup of what would be numerous lineups for Weather Report during their tenure.