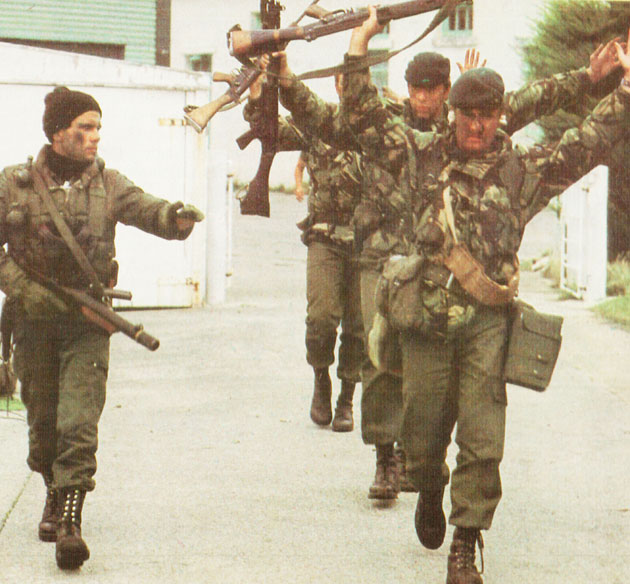 On April 3rd, 1982 the most common sound heard this day was the flipping of map pages, trying to figure out just where exactly and what exactly The Falkland Islands were.

Because on this day it was announced Argentina had invaded the tiny islands and were claiming them from Britain. Under the guise of Scrap-Metal merchants coming to dismantle a few ships, an Argentine invasion task force quickly landed and took over the islands; home to some 1800 residents and some 700,000 sheep. The dispute had been going on for some time; roughly off and on the past 150 years.

But the Military government of Gen.Leopoldo Galtieri figured it was time to make a statement, in lieu of deteriorating social and economic conditions in Buenos Aires. And what better way to distract attention from the left hand, than to get the right hand involved in an invasion, complete with taking prisoners, throwing victory parades and pissing off another country?

The dispute had been simmering since roughly 1833, when Britain seized the Falklands (or Malvinas) from Spain and claimed them as a British Colony. The tiny islands, some 500 miles off the coast of Argentina and within shouting distance of the Antarctic were of questionable importance to just about everyone, except perhaps the sheep who thrived.

But in what started off as a somewhat maladroit morale boost to a floundering dictatorship, quickly evolved into an international incident, with the U.S. being stuck somewhere in the middle between a plucky Argentine dictator and a British Prime Minister casually referred to in the Press as Attila The Hen. Sparks were bound to fly.

And fly they did on this April 3rd in 1982. Along with a lot of other news via this edition of the ABC Information Network’s World News This Morning.

And somehow, the saga continues . . .