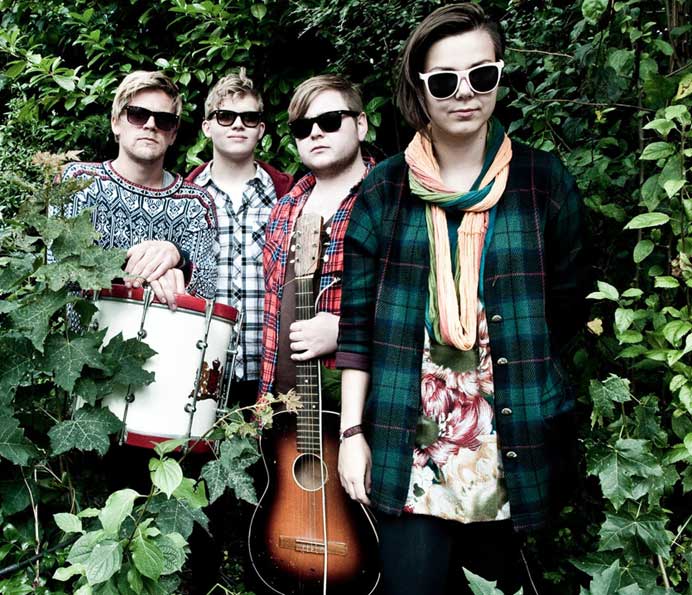 Of Monsters And Men -maybe not overnight sensation, but a few days at least.

Of Monsters And Men – In Session At Lowlands Festival 2012 – Nights At The Roundtable: Rock Without Borders Edition

Of Monsters And Men -maybe not overnight sensations, but maybe a few days.

Click on the link here for Audio Player: Of Monsters and Men – Lowlands 2012 Session

The past few years have seen a very interesting shift in Pop music. A lot of bands are getting away from heavy production, opting instead for stripped-down instrumentation, traditional (in the Folk sense) instruments, and generally harmonies and structure very much in sensibilities to the group-Folk movement of the late 1950s.

Not that anyone is going to come out sounding like The Kingston Trio or anything -but there is that very distinct feeling of traditional music coming back in vogue. Maybe more like Fairport Convention . . .just a hunch.

I remember running across Mumfred & Sons in early 2008, when they first got their Myspace page and were posting demos around the time they put their first ep together. I enjoyed them and found them refreshing to listen to – a world away from heavy-bordering-on-overwhelming production and sampling we had become so used to. But I wondered if there was an audience – certainly not a mainstream audience for this, seemingly new but really rather old, form of popular music.

So I was stunned to find the popularity of Mumford and Sons setting off a huge wave of stripped-down/back-to-basics music all over the music world and finding Of Monsters And Men from Iceland, following in those footsteps and, like Arcade Fire (whom they are most often compared to), bringing something new to the table.

Tonight it’s a session done especially for VPRO Radio in Hilversum Holland, as part of the Lowlands Festival in 2012. It’s a short set, but the audience is properly ecstatic to be there and it further cements the notion that musical concepts have changed and are enjoyed.

Of Monsters And Men have been together since 2010 and in a very short period of time gotten a huge following worldwide. They were standouts at last years SXSW and are scheduled to play at Coachella next week and are also slated to play at Glastonbury in June.

A very bright future for a band that just gets up and plays and has no pretense about it.