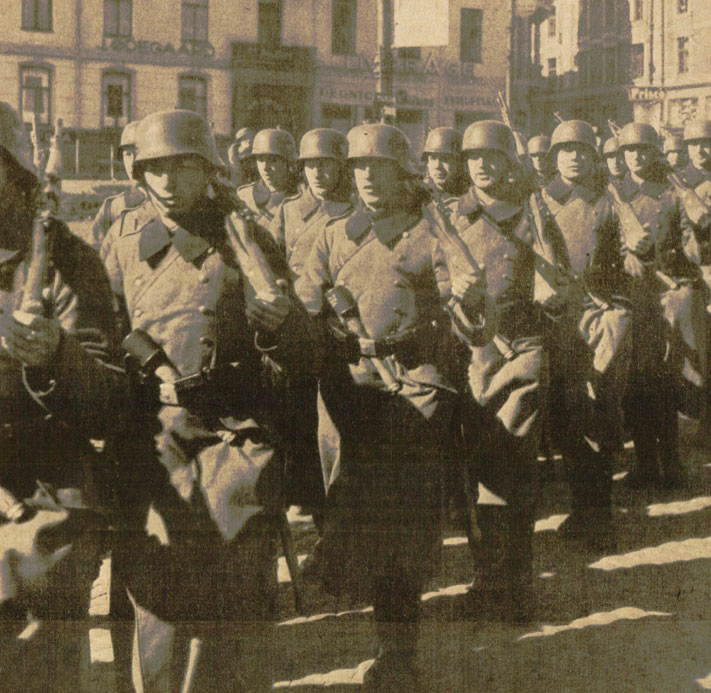 German Troops in Oslo - Going from Sitzkrieg to Blitzkrieg in less than a day.

German Troops in Oslo – Going from Sitzkrieg to Blitzkrieg in less than a day.

It helps, it really-really does: Become a Patron!

News for this day in April, 1940 was wall-to-wall bulletins regarding the German invasion of Norway and Denmark.

Starting in the early morning hours, news reports came filtering in via shortwave of “something going on at the Danish and Norwegian borders”. At first they were rumors. Unsubstantiated reports. Government spokesmen for the invaded countries awaken from their sleep by anxious reporters, being told office hours wouldn’t be open until 10 o’clock that morning. Even Radio Berlin, careful not to make any claims, eluded to some activity taking place in that region.

German forces were able to slip through the mines Britain had laid around Norwegian ports because local garrisons were ordered to allow the Germans to land unopposed. The order came from a Norwegian commander loyal to Norway’s pro-fascist former foreign minister Vidkun Quisling. Hours after the invasion, the German minister in Oslo demanded Norway’s surrender. The Norwegian government refused, and the Germans responded with a parachute invasion and the establishment of a puppet regime led by Quisling (whose name would become a synonym for “traitor”). Norwegian forces refused to accept German rule in the guise of a Quisling government and continued to fight alongside British troops.

As the hours passed, and the eyewitness accounts came filtering in, did the news finally emerge that yes, Norway and Denmark were now in the midst of a Blitzkrieg, that new word making the rounds at European Press offices, and the German Army was marching to Oslo and Copenhagen.

France and Britain scrambled to offer aid and conflicting reports were the order of the day.

There was other news that day, but it seemed to be overshadowed by the events going on in Europe. Commentators groped to analyze the quickly moving events, but one thing was clear – the War in Europe has just ratcheted up a few notches in the space of a few hours.

And that’s what went on this April 9th in 1940 as reported by the Blue Network of NBC Radio, Radio Berlin, the BBC and anyone else the frantic broadcast news rooms could dial in. News as it was breaking.