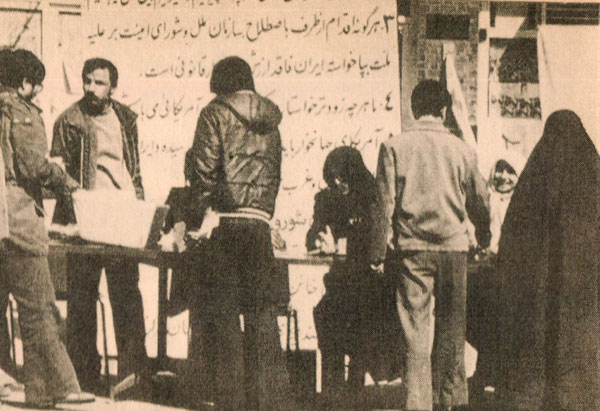 Ratcheting up the Anti-American Propaganda campaign in Tehran.

Ratcheting up the Anti-American Propaganda campaign in Tehran.

Another haywire day, this April 10th, in 1980. With news that the expelled Iranian diplomats were given a hero’s welcome on their return to Tehran was just one more element in the ongoing hostage drama as it hit Day 159. Along with chants of “Death To America” was a new propaganda film, released by the Tehran government, purported to claim the U.S. Embassy was a hotbed of spy activity, as confessed by one of the hostages. Also disclosed was the threat of releasing nude photos of Congressmen cavorting with relatives of the Shah. No doubt greeted with a collective “eww” on Capitol Hill and in most homes around the country. Still, they tried.

And if all that wasn’t enough, there was the Economy to contend with. All indications were we were heading on a crash-course with Recession, even though Presidential Candidate Ronald Reagan dangled a fanciful carrot at potential voters by advocating a Tax cut to cure the ills, despite Jimmy Carter’s pledge to balance the budget. Further evidence the Balanced Budget mantra has always had a certain McGuffin written all over it. When pressed on what those proposed Tax cuts would be, Reagan said, to the effect, “trust me”.

As for other parts of the Middle East – Egyptian President Anwar Sadat returned to Cairo on this day, after spending some time in talks with President Carter over a possible Middle East settlement. Talks between the U.S., Egypt and Israel were slated to continue in the coming weeks. Word from Sadat was tired, but hopeful. He added a note of pessimism regarding issues of stability in the Middle East. Most notably saying he felt the Assad regime in Syria would be toppled by the end of the year. In 1980 no less.

The situation in Lebanon was continuing at a disturbing pace, with the UN scrambling for some settlement in the dispute between Lebanon and Israel amid reports that Israeli Army units had established positions some 3 miles inside of Lebanon.

Meanwhile – back in the States. Protests were springing up all over the country by home builders protesting the continuing high interest rates, saying if the rates were lowered soon, it could have a big impact on the November election.

The Burt Lance Bank Fraud case was continuing, with testimony from Lance himself being anticipated on this day. A number of counts against Lance had been dropped the previous day, but there were still enough to make life unpleasant and cross-examining lively.

British Prime Minister Margaret Thatcher‘s call for Britain to join in the Olympic Games boycott was met with little enthusiasm and more setbacks on the part of the Athletic community, with only the Equestrian and Hockey teams still sticking to the boycott. Puerto Rico also reversed itself and decided to send their athletes anyway.

New York was in Day Number 10 of a transit strike, and the only thing anyone could say about it was, it was better on this day than it was 10 days earlier.

And that’s how the world rolled, this April 10, 1980, as reported by The CBS World News Roundup.