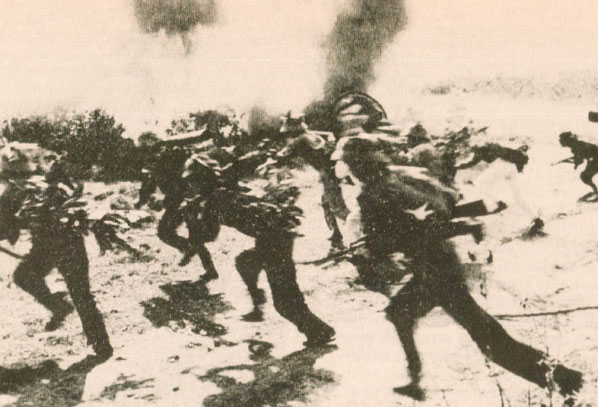 Another day, another North Vietnamese offensive.

Another day, another North Vietnamese offensive.

News for this April 11th in 1972 was, by admission of the newscaster on this broadcast; busy.

First was news regarding the ongoing war in Vietnam. The North Vietnamese offensive into South Vietnam was going into its 13th day with reports that the South Vietnamese Army was holding its own. What that actually meant was unclear, since no one had a clue as to what North Vietnam had up its sleeve. Despite optimistic news regarding the performance of the South Vietnamese Army, most reports indicated the North Vietnamese were surrounding most of the key battle areas. Still, the word being passed to the newsmedia was upbeat with enemy dead in “the thousands”, despite the fact that National Security Adviser Henry Kissinger was staying close to the situation, postponing a planned trip to Japan and a tone of grave concern was being felt around the White House. No U.S. ground troops were being committed, but planes and ships were, with reports that  the USS Saratoga was heading to Vietnam, along with 20 more B-52 bombers and several more squadrons of Phantom Fighter jets.

Meanwhile President Nixon, having declared a moratorium on School Busing in favor of increased Federal funding to ghetto schools, was having trouble getting the bill passed in the Senate, who were unable to find no more than two examples that increased spending led to better education in ghetto schools. Seems like money just wasn’t doing the trick. The  Justice Department was flooded with suits from School boards around the country with regards to the busing issue. School busing was going to be a hot-button topic for some time to come. Also along the lines of trouble for the Nixon White House was news that Nixon appointee for Attorney General Richard Kleindienst was having problems getting past the Senate confirmation hearings over allegations of interfering with an associate being investigated for obstruction of justice. A spokesman for the Attorney General’s office said Kleindienst did the right thing, even though the associate in question was guilty of highly improper conduct. Also looming was news on Kleindienst’s involvement in the ITT scandal. Had we known then what we know now . . .

And since it was also Tax season in 1972, stories regarding cheating and wrong-doing were dragged up. The latest being the trial of New Jersey Congressman Cornelius Gallagher and his indictment on Income Tax evasion. The timing was somewhat suspect, no doubt.

And news regarding the discovery of a long-forgotten tribe in the Philippine rain forest of Mindanao got everyone excited. The Tasaday tribe were thought to be the last surviving group of natives in the world, and their fear of extinction led Philippines President Marcos to declare the area a sanctuary and off-limits to developers and loggers. Described as a gentle people, with only 12 adults and 12 children, the discovery of the Tasaday was viewed as a breakthrough for Anthropologists to see Man in his primitive state. There was also speculation of two other tribes, living further back in the uncharted forest, waiting to be discovered. And at least for a time there were parts of the world still untouched by stress and war.

And that was what happened on Planet Earth, this April 11, 1972 as reported over The NBC Nightly News.