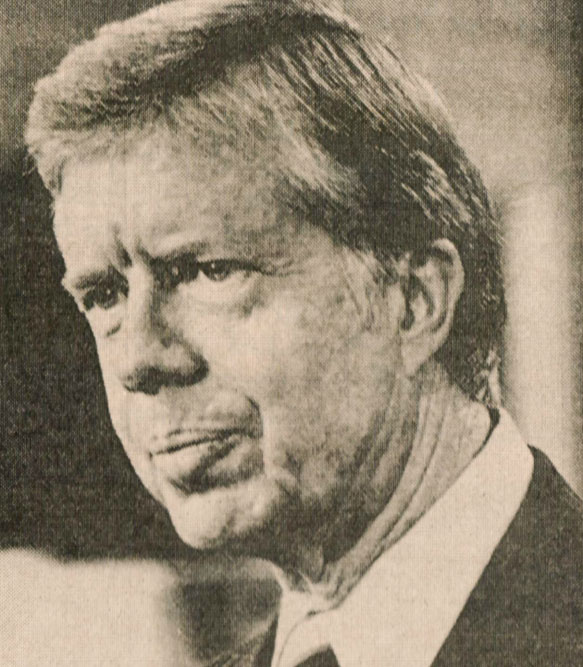 Jimmy Carter - At the time, Cassandra. In retrospect, Sage.

Jimmy Carter – At the time, Cassandra. In retrospect, Sage.

Further evidence April has had its fair share of drama in history. On this April 18th in 1977 it was a dire warning from President Jimmy Carter over the Energy Crisis that was looming.

On this day he spoke directly to the American people in an Address To The Nation, to be followed two days later with an Address to Congress and proposals to  curb our dependance on foreign oil and look for alternative energy sources.

Sounds rather familiar, doesn’t it?

Here’s some of what he had to say:

Pres. Carter: “Tonight I want to have an unpleasant talk with you about a problem that is unprecedented in our history. With the exception of preventing war, this is the greatest challenge that our country will face during our lifetime.

The energy crisis has not yet overwhelmed us, but it will if we do not act quickly. It’s a problem that we will not be able to solve in the next few years, and it’s likely to get progressively worse through the rest of this century.

We must not be selfish or timid if we hope to have a decent world for our children and our grandchildren. We simply must balance our demand for energy with our rapidly shrinking resources. By acting now we can control our future instead of letting the future control us.

Two days from now, I will present to the Congress my energy proposals.. Its Members will be my partners, and they have already given me a great deal of valuable advice.

Many of these proposals will be unpopular. Some will cause you to put up with inconveniences and to make sacrifices. The most important thing about these proposals is that the alternative may be a national catastrophe. Further delay can affect our strength and our power as a nation.

Our decision about energy will test the character of the American people and the ability of the President and the Congress to govern this Nation. This difficult effort will be the “moral equivalent of war,” except that we will be uniting our efforts to build and not to destroy.

Now, I know that some of you may doubt that we face real energy shortages. The 1973 gas lines are gone, and with this springtime weather, our homes are warm again. But our energy problem is worse tonight than it was in 1973 or a few weeks ago in the dead of winter. It’s worse because more waste has occurred and more time has passed by without our planning for the future. And it will get worse every day until we act.

The oil and natural gas that we rely on for 75 percent of our energy are simply running out. In spite of increased effort, domestic production has been dropping steadily at about 6 percent a year. Imports have doubled in the last 5 years. Our Nation’s economic and political independence is becoming increasingly vulnerable. Unless profound changes are made to lower oil consumption, we now believe that early in the 1980’s the world will be demanding more oil than it can produce.

The world now uses about 60 million barrels of oil a day, and demand increases each year about 5 percent. This means that just to stay even we need the production of a new Texas every year, an Alaskan North Slope every 9 months, or a new Saudi Arabia every 3 years. Obviously, this cannot continue.”

For a reminder, what’s been accomplished and what’s stayed the same – or reverted back to the 70s, here is that complete address as delivered by President Carer on April 18, 1977.