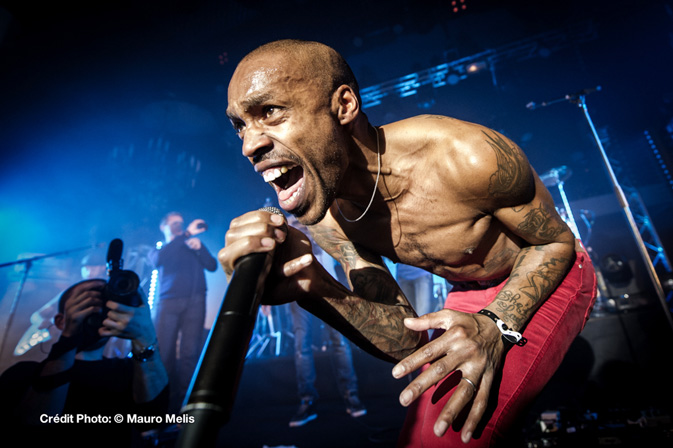 Mat Bastard of Skip The Use - do NOT give this man any Red Bull.

Skip The Use – Live In Paris – 2013 – Past Daily Backstage Weekend: Rock Without Borders Edition

Mat Bastard of Skip The Use – do NOT give this man any Red Bull.

Not that long ago, if you were a band from Continental Europe, you’d have a hard time getting arrested looking for a label deal, or even a pair of willing ears, in the U.S. – unless you were classified as Techno or Progressive. And even then it was hard for the vast majority of bands. Most of it had to do with the language barrier. The pre-conceived notion that English was the language of rock n’ roll and no other language would do deprived a lot of audiences from discovering bands that were worthy of attention. And that was a huge frustration.

Times have changed – although there is still the stereotype of English being the predominant language of Rock, a lot of bands from Europe are writing songs in English and working on smoothing out accents and, for the most part, have been met with a lot of success.

Case in point; the recent massive success of Phoenix, a band that is about as French as a baguette, yet most Americans have little if any idea where they are really from. They are being judged (for the most part) for the musical ability and the fact that, as a live band, they kick ass. And that’s a good sign. And the same goes for a number of other bands currently playing the Festivals here in the U.S.

So now we come to another up-and-comer from France. Skip The Use would pass the Anglo-Rock test with flying colors. They just look like a bunch of guys from Philadelphia or East London. And their singer, Mat Bastard (dunno about the name) gives a whole new meaning to the term High-Voltage. And if you paid no attention to the between-song banter, you would be totally convinced these guys are not French.

The fact that they are huge in France, and throughout Europe gives some idea of how popular this band is. And it would come as no surprise to find them eyeing this side of the Atlantic for gigs some time soon.

So to give you some idea of what’s going on, and probably about to happen over here in the coming months, here is a live concert by Skip The Use given at the prestigious Olympia in Paris last year and faithfully preserved for posterity by that radio powerhouse Le Mouv.

They just did a whole pile of live sessions for RTL in Belgium and are on tour throughout Europe and heading for some of the festivals over there this year. And from the sound of it, they have no intention of slowing down.

So check them out – and you can tell your friends you heard them here first . We’re good at stuff like that.