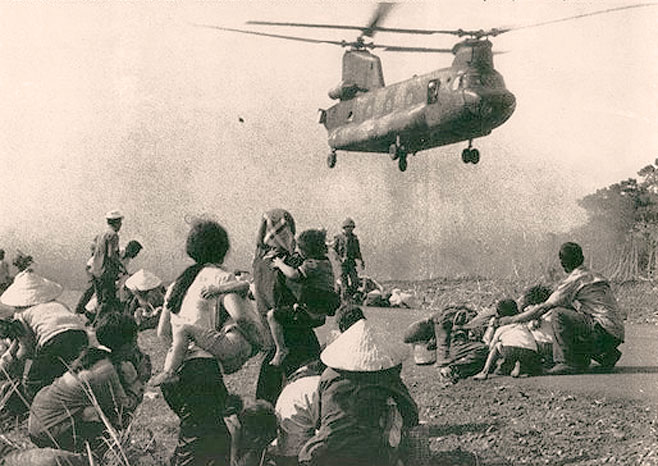 Within days it would be all over.

Within days it would be all over.

With the collapse of South Vietnam only a matter of time this April in 1975, word came on the 21st of the resignation of South Vietnamese President Nguyen van Thieu, citing anger and bitterness toward the U.S., claiming that it had broken its promise of support in sending troops and supplies to aid the besieged government.

The Battle of Xuân Lộc concluded with the South Vietnamese army retreating toward Saigon. Unlike earlier battles of the Spring Offensive, ARVN had put up a vigorous resistance to the attack of the North Vietnamese. Xuân Lộc was to be the last major battle of the Vietnam War. The North Vietnamese now controlled 2/3 of the territory of the country.

President Thieu of South Vietnam announced his resignation, leaving the government in the hands of Vice President Trần Văn Hương. In his 2-hour resignation speech, Thieu criticized the U.S. for not keeping its promises to Vietnam. He departed Vietnam in exile a few days later. In response to Thieu’s resignation, Secretary of State Henry Kissinger said that Thieu’s resignation “in all probability will lead to some form of negotiation” to save Saigon. However, all efforts to negotiate with North Vietnam proved fruitless.

After a systematic evacuation of staff and dependents by the Royal New Zealand Air Force beginning two weeks prior, the last New Zealanders, including Ambassador Norman Farrell, were evacuated from the New Zealand Embassy in Saigon.

The U.S. was sending troops; but troops to aid in the evacuation of some 3,000 Americans still in the country. The war was all but over. Three-quarters of South Vietnam were under North Vietnamese control. The capital of Saigon was surrounded with complete collapse just days, if not hours away. Panic was widespread as evacuation orders signaled impending surrender. South Vietnamese who were loyal to the U.S. were scrambling for a way out, and scenes of near-riot spread throughout the remaining South Vietnamese controlled areas as the end was coming quickly, and irrevocably.

Here is a Special Report from NBC News, broadcast on the night of April 21, 1975.