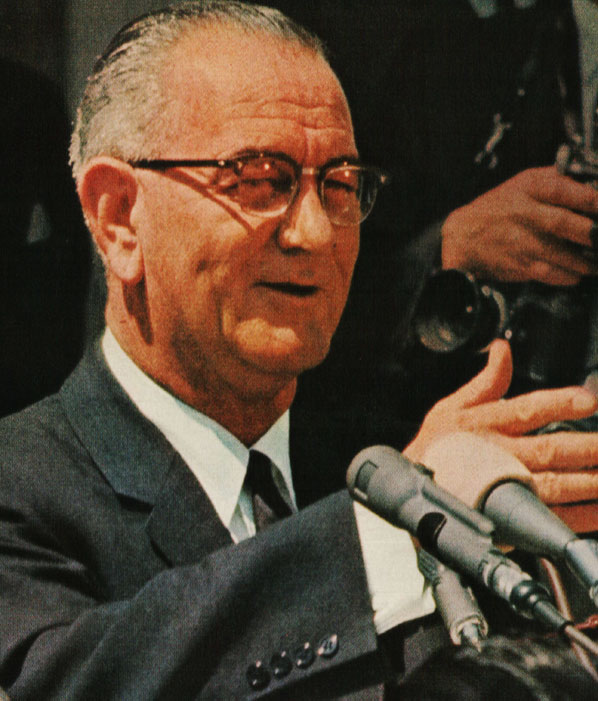 Anticipating the sigh of relief.

Anticipating the sigh of relief.

LBJ and cause for cautious optimism, this April 26th in 1964. President Johnson announced a reduction in Nuclear arms, and Soviet Premier Khruschev announced the same. For the first time, the arms race had slowed to a crawl. LBJ hailed it as a “step toward a peaceful world”. Just how long that would last was anybody’s guess. But considering how the year eventually went (Gulf of Tonkin, the ouster of Khruschev by Kremlin hardliners), it seemed like a good idea at the time. And anything was cause for celebration where the Cold War was concerned.

Cuba however, was grumbling with threats of shooting down any reconnaissance  flights over their airspace by American pilots, and the Soviet Union chimed in with support of whatever action Fidel Castro chose to take.

U.S. Ambassador to Vietnam Henry Cabot Lodge offered an upbeat assessment of the situation in South Vietnam, despite reports that the armies of General Khan were busy fending off attacks from Vietcong, rather than bolster confidence in the Khan government.

On the domestic front – LBJ did a tour of Appalachia and came back to Washington to press for economic aid to the depressed region.

Demonstrations and sit-ins greeted visitors and President Johnson to the New York World’s Fair that opened this week in 1964. The Civil Rights Movement was in full swing and demonstrations and protests would only escalate in the coming weeks and months.

And to top it all off – it was Campaign season and LBJ was mixing foreign and domestic policy with campaigning. Election ’64 was off and running.

That’s how it all rolled for the week ending on April 26th in 1964 as presented by ABC Radio and their Voices In The Headlines program.