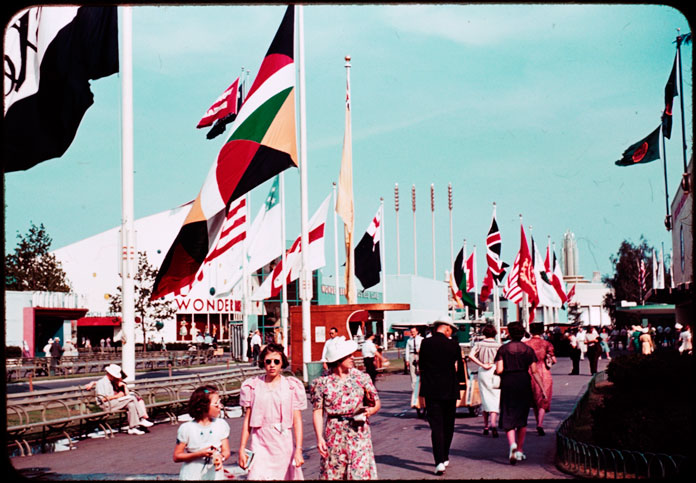 The World of Tomorrow in 1939 - All That promise - all that wonderment.

The World of Tomorrow in 1939 – All That promise – all that wonderment.

On this day in 1939, all eyes were on New York at the unveiling of the Worlds Fair of 1939. The World of Tomorrow; an idyllic world of peace and technological wizardry. The world where all things were possible.

Except for that dark, ominous thing looming in the distance – that dark thing called War in Europe. The War that would erupt a scant four months later and eventually engulf the rest of the world in its madness.

But April 30th in 1939 was all about optimism. And for the moment, the future was loaded with it.

On April 30, 1939, a very hot Sunday, the fair had its grand opening, with 206,000 people in attendance. The April 30 date coincided with the 150th anniversary of George Washington’s inauguration, in Lower Manhattan, as the first President of the United States. Although many of the pavilions and other facilities were not quite ready for this opening, it was put on with pomp and great celebration.

David Sarnoff, then president of RCA and a strong advocate of television, chose to introduce television to the mass public at the RCA pavilion. As a reflection of the wide range of technological innovation on parade at the fair, Franklin D. Roosevelt’s speech was not only broadcast over the various radio networks but also was televised along with other parts of the opening ceremony and other events at the fair. On April 30, 1939, the opening ceremony and President Roosevelt’s speech were seen on black and white television sets with 5 to 12-inch tubes. NBC used the event to inaugurate regularly scheduled television broadcasts in New York City over their station W2XBS (now WNBC). An estimated 1,000 people viewed the Roosevelt telecast on about 200 television sets scattered throughout the New York metropolitan area.

In order to convince skeptical visitors that the television sets were not a trick, one set was made with a transparent case so that the internal components could be seen. As part of the exhibit at the RCA pavilion, visitors could see themselves on television. There were also television demonstrations at the General Electric and Westinghouse pavilions. During this formal introduction at the fair, television sets became available for public purchase at various stores in the New York City area.

After Albert Einstein gave a speech and discussed cosmic rays, the fair’s lights were ceremonially lit. Dignitaries received a special Opening Day Program which contained their names written in Braille.

Here are those opening day ceremonies, featuring an address by President Franklin Roosevelt, all broadcast live on April 30, 1939.