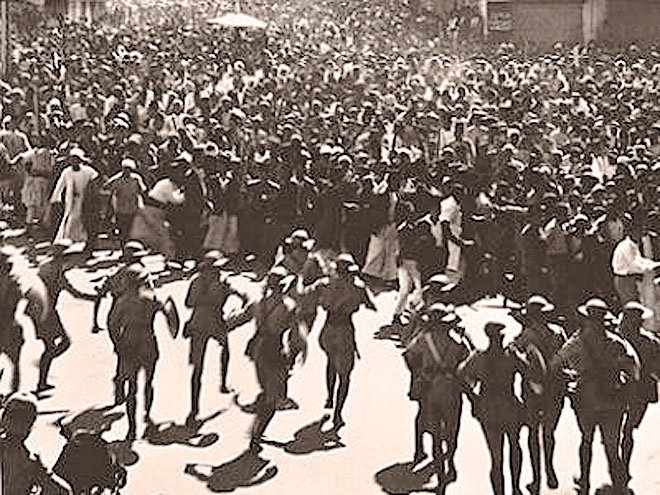 Arab rioting in Palestine 1946 - A lit fuse, ready to blow any second.

Arab rioting in Palestine 1946 – A lit fuse, ready to blow any second.

News for this particular May 3rd in 1946 was about the Middle East, primarily the area of Palestine. And the news wasn’t good. With tensions between Arabs and Jews mounting, with violence breaking out seemingly everywhere in the region, and the Partition Plan being proposed by the British government, it was a disaster waiting to happen.

With the mass migration of Jewish refugees streaming in from Europe, the vast majority recently liberated from the horrors of Nazi concentration camps, the new influx of immigrants brought with it fears from the Arab community of being overrun and pushed out of land believed to be theirs.

Since Britain had assumed the role of protectorate of much of the Middle East since the close of World War 1, some solution to the potentially deadly problem had to be found. But clearly, it looked like a no-win situation for all parties. And the threat of an all-out civil war was a real possibility, despite claims from London that this wasn’t the case. The body counts told a different story.

So the news for this day, as reported by Newscaster/Commentator Cedric Foster was an attempt to explain this powder-keg situation in a region not that well known in the U.S., but one that looked increasingly like a source of our problems in the future.

And some sixty-seven years later, it’s still a powder keg.

And that’s what was happening in at least one part of the world for May 3, 1946.