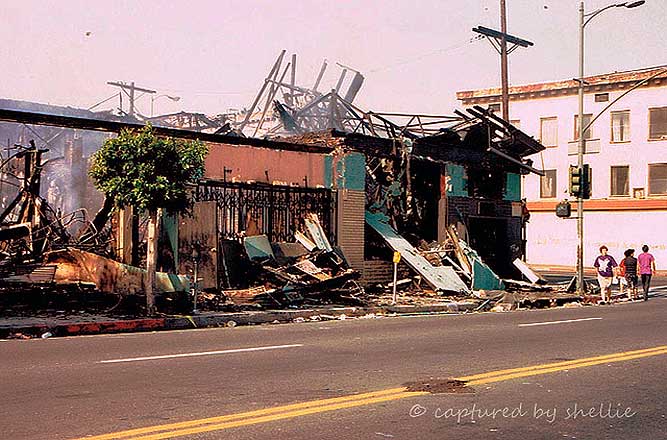 After the party - the hangover.

After the party – the hangover.

News for this May 14th in 1992 had a lot to do with recovery. On the one extreme, Shuttle Endeavor recovered a malfunctioning communications satellite. On the other extreme, recovery was slowly taking place from the devastating Los Angeles riots from only 8 days earlier. With the Shuttle it was hi-fives all around. In L.A., it was arraignments, nervous calm and assessing damage. As a result of the recent violence, gun sales in California shot up dramatically. Nerves were still pretty frayed. Rioters were believed to have been motivated by racial tensions but these are considered one of numerous factors. Urban sociologist Joel Kotkin said, “This wasn’t a race riot, it was a class riot.” Many ethnic groups participated in rioting, not only African Americans. Newsweek reported that “Hispanics and even some whites; men, women and children mingled with African-Americans.” “When residents who lived near Florence and Normandie were asked why they believed riots had occurred in their neighborhoods, they responded of the perceived racist attitudes they had felt throughout their lifetime and empathized with the bitterness the rioters felt. Residents who had respectable jobs, homes, and material items still felt like second class citizens. A poll by Newsweek asked whether black people charged with crimes were treated more harshly or more leniently than other ethnicities; 75% of black people responded “more harshly”, versus 46% of white people. Meanwhile, things weren’t going so well for the embattled Police Chief in San Francisco.

In Serbia however, the tentative ceasefire ended after 5 days of relative calm. Fighting once again erupted and fears of more “ethnic cleansing” were spreading throughout the region.

Continued condemnation over Libya‘s support of terrorism, despite it’s vow to close terrorist camps and expel terrorist-sympathetic countries with embassies in Tripoli. Suspicions had the Libyans not putting their money where their mouths were.

On Capitol Hill, hearings were set over the fate of the Spotted Owl. The Bush Administration claimed protection of the Owls meant significant loss of jobs in the timber industry and detractors claimed it was one more deregulation in favor of Big Business over protection of the environment.

And that’s how much of the day went – that and other news made this day what it was on May 14th 1992, as presented by CBS Radio and The World News Roundup.