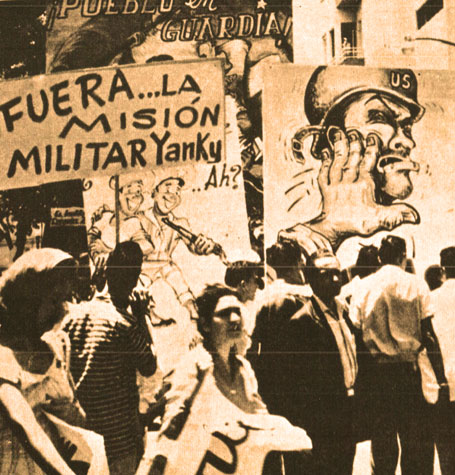 May 16, 1958 : Vice-president Nixon In South America – Having An Entire Continent Despise You.

News on this day in 1958 had to do with the aftermath of the disastrous visit by vice-President Nixon to South America. In each of the stops on this State visit, the Nixon party was greeted with bottles, rocks and violent Anti-American demonstrations.

By 1958, relations between the United States and Latin America had reached their lowest point in years. Latin Americans complained that the U.S. focus on the Cold War and anticommunism failed to address the pressing economic and political needs of many Latin American nations. In particular, they argued that their countries needed more basic economic assistance, not more arms to repel communism. They also questioned the American support of dictatorial regimes in Latin America simply because those regimes claimed to be anticommunist—for example, the U.S. awarded the Legion of Merit medal to Venezuelan dictator Marcos Perez Jimenez in 1954; Jimenez was overthrown by a military coup early in 1958.

This was the atmosphere into which Vice President Richard Nixon arrived during his goodwill trip through Latin America in April and May 1958. The trip began with some controversy, as Nixon engaged in loud and bitter debates with student groups during his travels through Peru and Uruguay. In Caracas, Venezuela, however, things took a dangerous turn. A large crowd of angry Venezuelans who shouted anti-American slogans stopped Nixon’s motorcade through the capital city. They attacked the car, damaged its body and smashed the windows. Inside the vehicle, Secret Service agents covered the vice president and at least one reportedly pulled out his weapon. Miraculously, they escaped from the crowd and sped away. In Washington, President Eisenhower dispatched U.S. troops to the Caribbean area to rescue Nixon from further threats if necessary. None occurred, and the vice president left Venezuela ahead of schedule.

As in everything that smacked of Anti-American sentiment during this period, the South American fiasco was blamed squarely on Communists gaining a foothold in the region. Not having anything to do with our failing Foreign Policy in the region, or our support of Military juntas. No, it was all the Communists fault.

As the result, much time was devoted by the media in the U.S. pondering that question. And this special edition of the weekly broadcast Radio Beat from CBS, devoted an hour to searching for answers.

Yes, our Foreign Policy was in a shambles, and it would only get worse as time went on. Bear in mind, Cuba would go through a dramatic upheaval less than a year later, ousting the Bautista regime in favor of Fidel Castro.

And the Cold War muddled on.