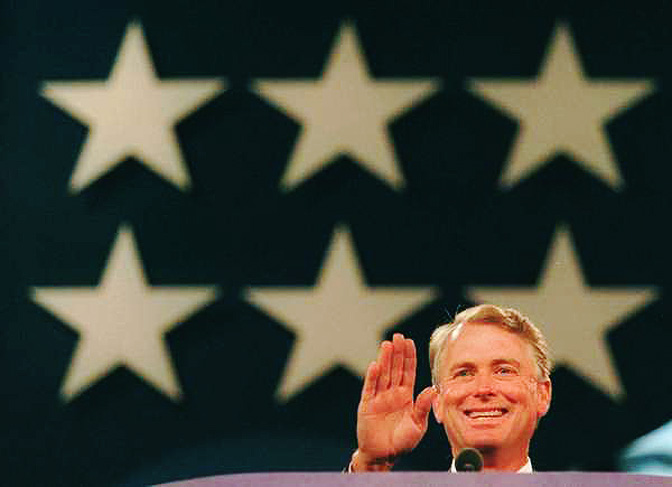 "I'm not part of the problem. I'm a Republican."

As 1992 Third Party Presidential Candidate Ross Perot aptly summed up: “This is goofy. We’re takin’ about a fictional character in a 30-minute sitcom”. And so began the week, that ended on this May 24th in 1992, with a storm of controversy over an episode of the hit TV sitcom Murphy Brown and the question over whether or not it was “right” that the Murphy Brown character give birth to a baby. The controversy became something of a cornerstone for the “family values” mantra that sprang up in the early 90s, and became a hot-button topic during the 1992 Presidential election.

Vice-President Dan Quayle, known as a veritable gold mine of gaffes, malapropisms and verbal bumblings to most comics and late-night TV hosts, touched off that latest fusillade of rhetoric while on a campaign swing through California. In an effort to shore-up the Republican vote for the upcoming California Primary, and to make a case for the “family values” issue, Quayle decided it was a good idea to take dead-aim on a nationally popular TV show. The results were quick and eyes rolled like slot-machine lemons.

With all the problems the Bush (Sr.) administration had to deal with, the notion of creating a controversy over a fictional character just seemed absurd, but it grabbed headlines for most of this week, and made for lively discussion in the weeks and months (if not years) to follow.

One more indication there was more than a little disconnect going on in Washington.

But that was only one batch of issues, going on this week in 1992.

The week also saw the post riot atmosphere in Los Angeles put on simmer. The  JFK Assassination conspiracies coming back into the news. Bandleader and Schmaltz-King Lawrence Welk died this week, and Johnny Carson said farewell to his slot as King of Late-Night TV after 30 years.

A busy seven days, to be sure.

Before the newscast started, there was an editorial delivered by the late Peter Jennings. The topic was also prophetic – the closings of chain Department stores and the changing face of retail in the U.S. – it was all giving way to malls. Well . . .now it’s all giving way to something else.

All that and a lot more for this busy week in May of 1992, as broadcast via ABC World News This Week and Peter Jennings Commentary on May 24, 1992.